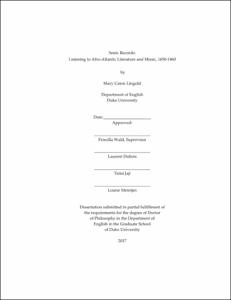 “Sonic Records” explores representations of early African diasporic musical life in literature. Rooted in an effort to recover the early history of an influential arts movement, the project also examines literature and sound as interdependent cultural spheres. Increasingly, the disciplines of literature and history have turned their attention to the Atlantic world, charting the experience of Africans living in the Americas through innovative archival interpretations and literary investigations. “Sonic Records” brings this work deeper into conversation with sound studies, a field that puts pressure on the historical privileging of textual and visual material over auditory expression. I show that scholarship on the early African diaspora and sound-based research are fittint allies; the very people whose culture and history were aggressively silenced by the violence of slavery and the print regime of the colonial archive participated in flourishing aural traditions. Black studies has a significant and long-standing tradition of scholarship on sound and music in literature of the nineteenth and twentieth centuries, yet the earliest eras of Atlantic slavery typically fall beyond the scope of this work, largely because of the scarcity of records from the period.

This project, therefore, takes on a significant challenge: how do you tell a story about a historical phenomena for which there appears to be no archive? “Sonic Records” argues that the sounds of the past are not actually lost, rather they are recorded in the pages of literature, on the surface of instruments, and in the evocative strains of living musical traditions. Across four chapters, this dissertation chronicles a genealogy of early African diasporic music by drawing together diverse sources from Africa, the Caribbean, and the United States, including seventeenth and eighteenth-century travel narratives, nineteenth-century slave narratives, musical notation, and visual illustrations. As a literary scholar, I interpret these works by close-reading, but I also close-listen to them, a kin strategy that scholars of sound use to show how auditory expression produces cultural meaning. The first two chapters focus on representations of African and Caribbean music in seventeenth and eighteenth-century memoirs by European observers, Richard Ligon (1657), Hans Sloane (1707), and John Stedman (1796). The final two chapters turn to subsequent generations in the biographies of African-American performers, including John Marrant (1785), Solomon Northup (1853), and a singer named Tina (circa 1830).

African musicians living in the new world made use of the presumption that sound is ephemeral to craft enduring performances that escaped capture while resonating across great distances. These artful productions, which took many forms across diverse societies, amounted to a significant force shaping life in the Americas alongside other well-documented intellectual genealogies. “Sonic Records” restores this legacy to intellectual history by locating the confluence of print and aural culture within the literature of the early Atlantic world.