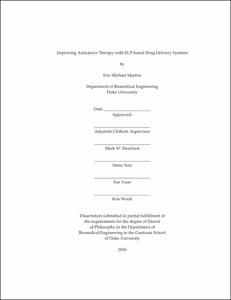 Cytotoxic chemotherapy is a mainstay of cancer treatment, administered to patients who require systemic treatment based on the stage of their disease. Due to its dose-limiting side-effects, chemotherapy is commonly administered to avoid lethal toxicity rather than to maximize efficacy. Therefore, a great deal of effort has been focused on packaging drugs into nanoparticles, promoting its accumulation in tumors due to the presence of leaky neo-vasculature and re-directing the drug away from critical organs. While these drug-delivery technologies consistently improve treatment efficacy compared to conventional therapies in primary tumors of preclinical models, new treatment modalities are often not assessed for their ability to interfere with the metastatic process. Therefore, we studied the efficacy of our genetically encoded polypeptide nanoparticle for doxorubicin delivery (CP-Dox) in syngeneic metastatic murine models 4T1 and Lewis lung carcinoma. When our nanoparticle drug treatment was combined with primary tumor resection, greater than 60% of the mice were cured in both the 4T1 and Lewis lung carcinoma models as opposed to a 20% survival rate when treated with free drug. Mechanistic studies suggest that metastasis inhibition and survival increase were achieved by preventing the dissemination of viable tumor cells from the primary tumor.

While targeting metastatic disease directly is the standard goal of systemic chemotherapy, drugs that improve the treatment of primary tumors still hold promise for treating disseminated disease if they can stimulate a systemic host antitumoral immune response. Interestingly, certain cytotoxic drugs like doxorubicin can alter the host immune response to tumors by causing immunogenic cell death, revealing tumor-associated antigens and recruiting antitumoral leukocytes that can be further activated by co-treatment with immunostimulatory agents. However, the drug delivery field currently lacks an understanding of how packaging cytotoxic drugs into nanoparticles alters or potentially enhances these immunomodulatory phenomena. Previous studies have often administered doxorubicin intratumorally or studied the phenomenon in immunogenic tumor models. Whether the immunomodulatory properties of doxorubicin can be observed with systemic administration against a poorly immunogenic tumor model is unclear. Therefore, we have performed extensive studies of CP-Dox while interfering with aspects of the immune system to determine the role of the host antitumoral immune response in its efficacy. In this project, we show that a single intravenous (IV) administration of CP-Dox enhances the host anti-tumor immune response, enabling CD8+ cells to contribute to the prevention of metastasis in 4T1 mammary carcinoma. We show that IV CP-Dox increases the ratio of Th1 to Th2 cytokines in the tumor, and that IFN-y depletion reduces the efficacy of CP-Dox. We observed that the myeloid cell infiltrate was re-polarized to express markers associated with an anti-tumor phenotype. Importantly, these effects were not seen in mice treated with free doxorubicin. Our studies provide evidence that formulating cytotoxic chemotherapies as nanoparticles can better enable their in vivo immunomodulatory capabilities, demonstrating the potential of combining nanoparticle delivery strategies with immunotherapy to improve the treatment of cancer.

Cytokine treatment was the first successful immunotherapy for cancer. Systemic administration of IL-2 leads to treatment responses in about 20% of patients with melanoma and renal cell carcinoma. However, the treatments have significant, life-threatening side-effects, leading to interest in local administration of IL-2. We have developed a bioactive ELP/IL-2 fusion which forms an insoluble coacervate upon in vivo injection. Intratumoral treatment of the fusion delayed the growth of B16 melanoma, and showed improved efficacy when combined with CP-Dox treatment. We also developed a bioactive ELP/GM-CSF fusion which was shown to recruit leukocytes to the site of subcutaneous injections. We show that the immunostimulatory activity of CpG is enhanced by condensation an ELP containing a lysine trailer. Thus we have developed several key ingredients for an in situ cancer vaccine which can generate antigen (CP-Dox), stimulate antigen presentation (GM-CSF and CpG), and stimulate T cells (IL-2).