Playing the Tyrant: The Representation of Tyranny in Fifth-Century Athenian Tragedy 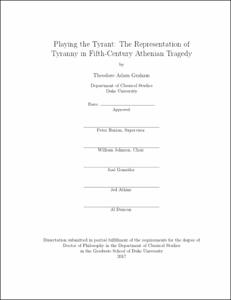 In my dissertation, I trace the depiction of the tyrant-ﬁgure in ﬁfth-century Athenian tragedy, and how this ﬁgure reﬂects Athenian changing self-identity over the course of the ﬁfth century. Given the crucial function of tragedy in both Athenian civic display and introspection, the ﬁgure of the tyrant was deeply encoded in the matrix of tragedy. The “tyrant” was the most signiﬁcant referent in the Athenian political imagination, the threatening Other that helped shape Athenian self-identity by inversely deﬁning what values the city should hold.

I consider tragedies by Aeschylus, Sophocles and Euripides, considering the socio- political context for each playwright’s staging of tyranny. I begin with a reading of Aeschylus’ Persians, which stages the Greek victory at Salamis from the Persian point of view. By situating the drama in a foreign court, the tragedy foregrounds the non-democratic aspects of Persian monarchy and society, deﬁning the anti-democratic aspects of the Great King’s court to better articulate Athenain democratic values. The Prometheus Bound, similarly distanced from contemporary Athens, takes place under the tyranny of Zeus; by portraying the god as the worst possible instantiation of a hubristic, violent human ruler, Aeschylus performs a reductio ad absurdum of tyrannical ideology that would seek to portray the human tyrant as divine.

In Sophocles’ Oedipus Tyrannus and Antigone, by contrast, tyrants embody the ideological strain of the exercise of power that Athens experienced at the head of the Delian League. Both tragedies portray tyrants who, with praiseworthy motives (and even, at times, with reasonable, democratic rhetoric), struggle under a burden of governance that they cannot sustain. Unlike the Aeschylean Xerxes or Zeus, who are distant, barely-seen ﬁgures that loom over their respective tragedies, Oedipus and Creon are the focal-points of their dramas. The tragedies exploit the tension between the Athenian political conception of tyranny, as a totally negative phenomenon opposed to equality and democratic freedom, and an earlier, Panhellenic (insofar as it did not originate in any one polis) conception that casts tyranny in a more equivocal light, as something worthy both of fear and of jealous awe. Invoking both views together, these tragedies problematize the straightforward depiction of tyranny as something wholly good or bad.

Writing in the last decades of the ﬁfth century, during which time Athenian democ- racy grew increasingly embattled and unpredictable, Euripides’ tragedies collapss the tyranny/democracy dichotomy entirely. In the Suppliant Women, Theseus, a monarch, is cast as the robust defender of Athenian democracy, the overseer of a system in which logically he would have no place. While this contradiction is inherent of a traditional formulation of Theseus, the tragedy highlights the incongruity of the situation by imbuing the king’s dialogue with strikingly modern rhetoric, and making him proﬁcient in contemporary sophistic modes of argumentation. Inversely, Euripides repeatedly employs the motif of the “tyrant mob”; in Hecuba and Iphigenia at Aulis, the tyrannical power of a quasi-democratic body exerts a terrible inﬂuence on events, unyielding to both logic and justice. The weaknesses of democracy, the poisonous power of persuasion and the unthinking nature of collective action, are portrayed as the inseparable ﬂip side of its virtues: mass participation and equality of speech.

Behind all three tragedians, the archaic moral conception of the tyrant stands as a model and foil. The traditional traits of tyranny are either reinforced or subverted, embodied in Zeus or given a new ideological charge by their application to collectives. v The ﬁgure of the tyrant (both in its political and moral conceptions) is an ideological reference point whose trajectory mirrors that of Athenian democracy itself, from a system predicated on opposition to sole rule and with mechanisms to prevent the consolidation of power, to the means by which, by the end of the Peloponnesian War, single individuals wielded undue inﬂuence over a polis that itself ruled a signiﬁcant portion of the Greek world.