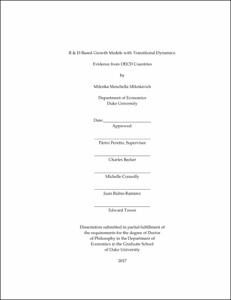 Our study quantifies the impact of research and development (R&D) spending on technological progress, and hence on economic growth following the hypothesis that the second-generation growth theory best describes the data generation process of knowledge accumulation in the economy. Understanding the relationship between R&D and productivity is important for policy design geared toward enhancing economic growth.

In order to estimate the long-run relationship between total factor productivity (TFP) and R&D activity, this study estimates an error correction model to test for transitional dynamics and long-run dynamics among productivity, investment in R&D and spillovers. To achieve this, we apply the econometric methods proposed by Pesaran and Smith (1995), Pesaran (1997) and Pesaran et al. (1999), the pooled mean group (PMG) estimators, to estimate the relationship among TFP investment in R&D and spillovers using an annual dataset for 21 OECD countries from 1965 to 2015. The advantage of using this estimator is that it uses the information in the data to estimate both the long-run and the short-run dynamics simultaneously.

As independent variables, we have constructed stocks for R&D expenditure as a percentage of GDP, also known as R&D intensity, which is a measure defined as a firm’s R&D expenditure divided by its sales. R&D intensity varies according to a firm's industry, product knowledge, manufacturing, and technology, and is a metric that can be used to gauge the level of a firm's investment to enhance productivity. The aim of R&D expenditures, ultimately, is to increase productivity. R&D intensity at the country level is defined as its R&D expenditure as a percentage of gross domestic product (GDP). This is an indicator that reflects the level and structure of the efforts undertaken by countries in the field of science and technology. In the second-generation growth models R&D intensity is also referred to as a measure that captures R&D adjusted by product proliferation (Young, 1998; Madsen, 2008).

Regarding the short-run dynamics, the error correction estimates are statistically significant and do not differ significantly among different specifications. The range for the speed of adjustment ranges between -0.0881 and -0.0695, which implies that half of the time that would take for a 1% deviation of TFP from the long-run relationship to close will be approximately of 5 years.

We find empirical evidence that there is a structural break in the long-run relationship between TFP and R&D in 2002. We can infer that the use of a common currency in the Eurozone improved the mechanisms whereby knowledge was transmitted among the countries in our sample. The productivity increase after 2002 can be explained by the conclusion of Coe and Helpman (1995) that trade increases productivity by the mechanism of international technological spillovers; therefore, an increase in trade would enhance productivity among trading partners. Frankel (2008) conducted a survey on the impact of the European Monetary Union (EMU) on bilateral trade and found a positive effect on bilateral trade where the positive effects of a common currency range between 10% and 15% for the first years of the entry in force of the EMU.

From the forecasts performed based on the baseline and VAR estimations we arrive to the following conclusion. Since the forecasts for the growth rates of the own-R&D stock are constant for the representative country composed by all the countries in our sample, all the variation of total factor productivity has to be explained from the behavior of the R&D performed by other countries.

On one hand, for the representative country composed by all the countries in our sample, the decreasing forecasted TFP growth rates are accompanied by an increase in the forecasted R&D performed by other countries growth rates. This would imply that growth for the representative country conformed by the 21 countries in our sample would be explained in part by spillovers.