History and Hope: The Agrarian Wisdom of Isaiah 28–35 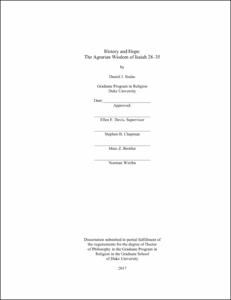 Throughout the nineteenth and twentieth centuries, modern historical-critical study of the book of Isaiah succeeded in showing that the text emerged in stages over perhaps three hundred years, rather than as the fully formed product of a preexilic prophet. This mode of inquiry resulted in the widespread assumption that Isaiah is best approached as at least three distinct texts that express little if any intrinsic relationship with each other. The rise of literary criticism in the late 1970s and early 1980s, however, reminded readers that the Bible deserves to be studied as a body of theological literature regardless of the multiplicity of authorial contexts from which it derives. Overcoming Isaiah’s well-established diachronic fragmentation, however, has proven no straightforward task; readers have often and understandably resorted to thematic generalizations in their effort to describe the whole. The differences characteristic of these two approaches to Isaiah reflect the methodological splintering of biblical studies at large, where analysis of a text’s literary shape and theological message is frequently pitted against its rich history of composition.

Recent research has begun to ask a more profitable, interdisciplinary set of questions: What is the relationship between Isaiah’s diachronic development and its final form, and what might synchronic analysis of its final form teach us about its history of composition? Indeed, as several scholars have pointed out, a synchronic examination of Isaiah’s language and argument is a necessary first step in making accurate judgments regarding its diachronic development. Fresh inquiry into the book’s synchronic shape that does not ignore the history and culture from which it arose therefore represents a leading edge in Isaiah studies today.

History and Hope: The Agrarian Wisdom of Isaiah 28–35 examines the rhetorical function of Isa 28–35, a relatively overlooked series of six woe-oracles, in relation to the reader’s encounter with the book of Isaiah as a whole. At a diachronic level, the project seeks to improve the historical model that typically informs scholars’ perceptions of Isaiah’s construction. Through comparisons to the thought and practice of several contemporary agrarian thinkers, it draws attention to the holistic, agrarian worldview of the people who wrote and transmitted the Bible. This comparison suggests that an “agrarian hermeneutic” provides a historically- and phenomenologically-appropriate lens by which to examine the eight chapters in question. At a synchronic level, the project uses modern literary theory to describe the written text’s “epistemological layering,” thereby accounting for important differences between characters and readers. When combined with an agrarian hermeneutic, this move opens scholarly understanding of Isaiah’s written rhetoric to the associative logic by which it is constructed, and which is everywhere evident in the “intratextual” web of Leitwörter, motifs, and recurring ideas that run throughout the book. Through careful, exegetical analysis of Isa 28–35 in its sequential unfolding relative to the book as a whole, the project argues that these eight chapters use the language of agrarian wisdom to issue a call to obedience that transports the reader from prior reflections on historical destruction into a vision of ultimate hope.