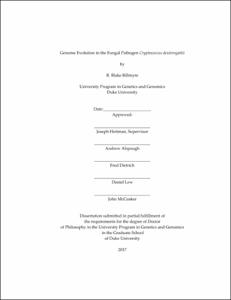 One of the key challenges of the 21st century is the emergence and reemergence of pathogens. Fungal pathogens represent an important portion of this problem, as the cohort of immunocompromised patients susceptible to common fungal pathogens rapidly expands in the developed world, and HIV/AIDS continues to present substantial challenges in the developing world. Understanding the processes by which pathogens emerge is critical, both for treating current outbreaks and for preventing future outbreaks. Here I have focused on the human fungal pathogen Cryptococcus deuterogattii, an emerging pathogen responsible for an ongoing outbreak in the Pacific Northwest region of the United States and Canada over the past approximately 15 years. To do so, I have taken comparative genomic, population genomic, and classic genetic approaches to understanding the origin of the outbreak, and the evolution of virulence at three different levels. I will first compare C. deuterogattii to the rest of the Cryptococcus pathogenic species complex, followed by comparisons of clonal clusters within C. deuterogattii, and finally I will compare individual strains within the VGIIa cluster.

I will begin in Chapter 1 by introducing genetic and non-genetic drivers of phenotypic diversity. I will then introduce the diversity of the fungal RNAi pathway, as well as discuss the frequent losses of the RNAi pathway throughout the eukaryotic kingdom.

In Chapter 2, I will examine the differences between the C. deuterogattii species responsible for the Pacific Northwest outbreak and the non-outbreak members of the Cryptococcus pathogenic species complex. I began by comparing the R265 reference genome of C. deuterogattii to the C. neoformans, C. deneoformans, and C. gattii reference genomes. Here we discovered that the core components of the RNAi pathway, including both argonautes, one of the two Dicers, and the only RNA-dependent RNA polymerase had been lost in the C. deuterogattii genome. These gene losses are conserved across the entire species and are defining characteristics of the species. We utilized this information to conduct a comparative genomics screen and identified a total of 14 conserved genes that were lost in the C. deuterogattii genome. We tested these for function in the RNAi pathway and discovered that a number of previously uncharacterized genes are novel RNAi components. In total, 9 of the 14 genes have been shown to play a role in the RNAi pathway. We demonstrated that the sex-induced (SIS) and mitotic-induced (MIS) silencing pathways share core components, and that SIS requires additional pathway components not required by MIS, suggesting that SIS may be a related and more specialized version of MIS. Finally, we showed that SIS appears to be induced through the pheromone signaling and MAP kinase cascade.

In Chapter 3, I will describe a whole genome resequencing project where we sequenced and analyzed clonal outbreak strains from the Pacific Northwest, related strains from outside the outbreak, as well as representatives of diverse global isolates. We utilized phylogenomic inference to provide evidence that the three clonal subgroups of the outbreak had distinct proximal origins: VGIIa in South America, VGIIb in Australia, and VGIIc with no identified origin outside the United States. We also demonstrated that the C. deuterogattii population shows patterns consistent with ancestral mating, but shows little evidence of more recent mating events, meaning that the population is characterized primarily by long periods of clonal growth with only intermittent episodes of sexual recombination.

In Chapter 4, I will examine variation within the VGIIa and neighboring VGIIa-like groups of C. deuterogattii uncovered through our resequencing study. We identified an msh2 nonsense allele ancestral to the VGIIa-like group. Here we demonstrate that this allele is responsible for a mutator phenotype that is particularly severe in genes containing homopolymer runs. Mutator strains are uncommon in eukaryotic microbes, and this lineage may represent a rare stable and successful environmental hypermutator lineage. However, I will also present evidence that the mutator state leads to high mutational burden and eventually loss of virulence, and argue that the mutator allele did not play a role in the expansion of the Pacific Northwest Outbreak in the VGIIa group.

In Chapter 5, I will conclude this thesis and provide some thought towards future directions that emerge from this work. Finally, in Appendices A and B I will discuss a pair of unfinished projects focusing on identifying novel mycoviruses in RNAi deficient lineages and the genetic basis of 5-FC resistance.