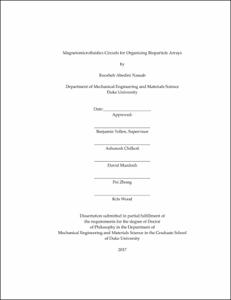 Single-cell analysis (SCA) tools have important applications in the analysis of phenotypic heterogeneity, which is difficult or impossible to analyze in bulk cell culture or patient samples. SCA tools thus have a myriad of applications ranging from better credentialing of drug therapies to the analysis of rare latent cells harboring HIV infection or in Cancer. However, existing SCA systems usually lack the required combination of programmability, flexibility, and scalability necessary to enable the study of cell behaviors and cell-cell interactions at the scales sufficient to analyze extremely rare events. To advance the field, I have developed a novel, programmable, and massively-parallel SCA tool which is based on the principles of computer circuits. By integrating these magnetic circuits with microfluidics channels, I developed a platform that can organize a large number of single particles into an array in a controlled manner.

My magnetophoretic circuits use passive elements constructed in patterned magnetic thin films to move cells along programmed tracks with an external rotating magnetic field. Cell motion along these tracks is analogous to the motion of charges in an electrical conductor, following a rule similar to Ohm’s law. I have also developed asymmetric conductors, similar to electrical diodes, and storage sites for cells that behave similarly to electrical capacitors. I have also developed magnetophoretic circuits which use an overlaid pattern of microwires to switch single cells between different tracks. This switching mechanism, analogous to the operation of electronic transistors, is achieved by establishing a semiconducting gap in the magnetic pattern which can be changed from an insulating state to a conducting state by application of electrical current to an overlaid electrode. I performed an extensive study on the operation of transistors to optimize their geometry and minimize the required gate currents.

By combining these elements into integrated circuits, I have built devices which are capable of organizing a precise number of cells into individually addressable array sites, similar to how a random access memory (RAM) stores electronic data. My programmable magnetic circuits allow for the organization of both cells and single-cell pairs into large arrays. Single cells can also potentially be retrieved for downstream high-throughput genomic analysis.

In order to enhance the efficiency of the tool and to increase the delivery speed of the particles, I have also developed microfluidics systems that are combined with the magnetophoretic circuits. This hybrid system, called magnetomicrofluidics, is capable of rapidly organizing an array of particles and cells with the high precision and control. I have also shown that cells can be grown inside these chips for multiple days, enabling the long-term phenotypic analysis of rare cellular events. These types of studies can reveal important insights about the intercellular signaling networks and answer crucial questions in biology and immunology.