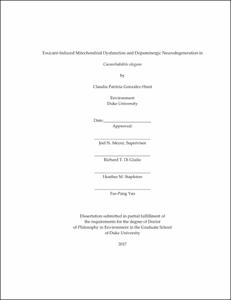 Mitochondrial dysfunction appears to be a hallmark of many neurodegenerative diseases. The link between mitochondrial and neuronal health is particularly strong in Parkinson’s disease (PD). Genes that have been shown to cause PD when mutated are known to interact with mitochondria to varying degrees; particularly, two of the genes associated with mitochondria-specific autophagy (mitophagy), PINK1 and PARK2, have been shown to cause autosomal recessive PD. Deletions and mutations in mitochondrial DNA (mtDNA) have been detected in the substantia nigra of PD patients. Furthermore, toxicants used to model PD in the laboratory are known to exert their toxicity by disrupting mitochondrial function. Despite all the advances in PD research, the precise mechanisms through which this disease arises are still not well understood.

The central goal of this dissertation was to investigate the role that mtDNA damage and mitochondrial dysfunction play in causing dopaminergic neurodegeneration in the context of PD. This work was performed with a particular focus on mitochondrial toxicants: their mechanism of action and effect on neuronal health, and how these toxic exposures might exacerbate genetic susceptibilities. Another goal was to identify windows of susceptibility to mtDNA damage, with early life and old age being of particular interest. To explore these ideas, the nematode Caenorhabditis elegans was utilized as a model organism.

To characterize age-related sensitivity to mtDNA damage, worms at different life stages were exposed to ultraviolet C (UVC) to accumulate mtDNA damage and the effect of this damage on mitochondrial genome copy number and dopaminergic neuron health was assessed. To evaluate the role of autophagy in maintaining mitochondrial and neuronal health after toxicant exposure, mitophagy gene knockouts (KOs) and wild type worms were exposed to 6-hydroxydopamine (6-OHDA) and UVC; to study non-selective macroautophagy, starvation was used to induce it, and nematodes were subsequently subjected to a toxic exposure. Dopaminergic neuron morphology, targeted gene expression, and mitochondrial morphology were evaluated. Lastly, the mechanism of toxicity of rotenone in C. elegans was investigated; specifically, mitochondrial respiration (with the Seahorse Bioanalyzer), targeted metabolomics, ATP levels, and targeted gene expression were evaluated.

Due to technical complications with our UVC exposure model and PCR-based evaluation of mtDNA damage in C. elegans eggs, the windows of susceptibility to mtDNA damage hypothesis could not be properly tested. However, our current results do not support this idea. Our studies on the role of autophagy in the context of toxicant-induced dopaminergic neurodegeneration suggest that both non-selective macroautophagy and mitophagy have a protective effect. We saw protection from 6-OHDA-induced neurodegeneration after starvation treatment, suggesting that macroautophagy could be playing a protective role. In the context of mitophagy mutations, we saw different responses to UVC and 6-OHDA. Both pink-1 and pdr-1 mutants were more sensitive to UVC-induced dopaminergic neurodegeneration than the control strain; however, only the pdr-1 strain was more sensitive than the control strain to 6-OHDA. The pink-1 mutant was actually protected from neurodegeneration caused by 6-OHDA. We proceeded to evaluate antioxidant responses in these strains (since 6-OHDA exerts its toxicity mainly via oxidative stress) but saw no differences across strains. We are currently testing the hypothesis that changes in the mitochondrial network in the pink-1 mutant after 6-OHDA exposure allow it to better withstand its toxic effect. Our studies into the mechanism of action of rotenone in C. elegans gave us surprising results: we saw no major alterations in oxygen consumption or ATP levels. However, various metabolites were altered, signaling a metabolic restructuring similar to that observed in C. elegans complex I mutants. Also similar to complex I mutants, it appears that the glyoxylate pathway is upregulated after rotenone exposure; this alternate pathway parallel to the citric acid cycle might be allowing the nematodes to acclimate to rotenone exposure, explaining our respiration and ATP results.

Overall, this dissertation work supports the link between mitochondrial dysfunction and dopaminergic neurodegeneration, and provides new hypotheses for research in this field.