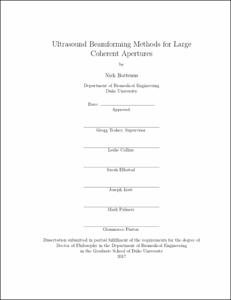 This dissertation investigates the use of large coherent ultrasound apertures to improve diagnostic image quality for deep clinical targets. The current generation of ultrasound scanners restrict aperture size and geometry based on hardware limitations and field of view requirements at the expense of image quality. This work posits that, without these restrictions, ultrasound could be used for higher quality non-invasive imaging. To support this claim, an experimental device was constructed to acquire in vivo liver images with a synthetic aperture spanning at least 35 degrees at a radius of 10.2 cm with a scan time under one second. Using a 2.5 MHz commercial matrix array with the device, a lateral resolution of 0.45 mm at a depth of 11.6 cm was achieved, surpassing the capabilities of existing commercial systems. This work formed the basis for an in-depth investigation of the clinical promise of large aperture imaging.

Ex vivo study of volumetric imaging through the human abdominal wall demonstrated the ability of large apertures to improve target detectability at depth by significantly increasing lateral resolution, even in the presence of tissue-induced aberration and reverberation. For various abdominal wall samples studied, full-width at half-maximum resolution was increased by 1.6 to 4.3 times using a 6.4 cm swept synthetic aperture compared to conventional imaging. Harmonic plane wave imaging was shown to limit the impact of reverberation clutter from the tissue layer and produce images with the highest target detectability, up to a 45.9% improvement in contrast-to-noise ratio (CNR) over fundamental imaging. This study was corroborated by simulation of a 10 cm concave matrix array imaging through an abdominal wall based on the Visible Human Project data set. The large aperture data were processed in several ways, including in their entirety as a fully populated large array as well as mimicking the swept synthetic aperture configuration. Image quality improved with growing aperture size up to the extent of the simulated array. Contrast was increased by up to 8.4 dB and CNR by 15.5% for the full aperture compared to a 1.92 cm length array in addition to the significantly improved resolution. While the magnitude of aberration was estimated to be 25.4 ns in the simulation, reverberation clutter seemed to be the dominant source of image degradation in these studies.

Selected nonlinear beamforming methods were applied to both data sets to produce images with reduced acoustic clutter. Spatial compounding was applied to the large aperture to improve contrast by 13.4 dB and CNR by 54.4%, greatly increasing the visibility of the anechoic lesion target. It is hypothesized that the variation in the acoustic properties of the abdominal wall across the extent of the large aperture led to variations in the observed clutter that were favorable for spatial compounding. Short-lag spatial coherence (SLSC) imaging applied to the synthetic aperture images also improved image quality, but had a smaller impact for the large array data than has been previously described in the literature. Strongly suppressed spatial coherence was observed across the large array and may have limited the ability of SLSC to reduce the impact of clutter in the images.

In summary, by combining advanced beamforming methods with a large aperture extent, high quality images were produced in challenging imaging environments. This work suggests that development of a large coherent ultrasound system would benefit patients whose needs cannot be met with current technologies due to insufficient resolution at depth.