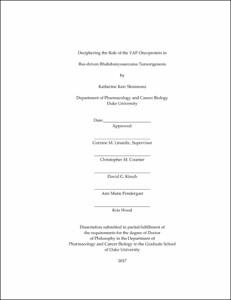 Rhabdomyosarcoma (RMS), the most common soft tissue sarcoma in children and adolescents, is characterized by skeletal muscle features. The Ras-driven subset, which includes the embryonal (eRMS) and pleomorphic (pRMS) histologic subtypes, is an aggressive high risk subgroup with a 5-year survival rate of <30%. Recently the YAP oncoprotein, which is ordinarily silenced by the Hippo tumor suppressor pathway, was found to be highly upregulated in RMS tumors. However, the role of YAP in the Ras-driven subset was unknown.

To understand the impact of YAP signaling on cell stemness, we cultured eRMS cells as 3D spheres. These spheres are enriched in stem cell genes, as well as in YAP and Notch signaling. The Notch pathway is another developmental pathway that is also highly upregulated in eRMS and contributes to tumorigenesis. Using the spheres as a model, we uncovered a bidirectional signaling circuit between YAP and Notch that regulates stemness. Active Notch signaling upregulates YAP, and YAP in turn upregulates the Notch ligands JAG1 and DLL1 and the transcription factor RBPJ. This circuit controls expression of several stem cell genes including SOX2, which is functionally required for eRMS cell stemness. Silencing this circuit for therapeutic purposes may be challenging, since the inhibition of one node (for example pharmacologic Notch blockade) can be rescued by upregulation of another (constitutive YAP expression). Instead, dual inhibition of Notch and YAP is necessary. Supporting the existence of this circuit beyond a model system, nuclear Notch and YAP protein expression are correlated in human eRMS tumors, and YAP suppression in vivo decreases both Notch signaling and SOX2 expression. In preliminary studies, we also analyzed the differential effects of the three Ras isoforms on eRMS tumorigenesis, Ras-Notch, and Ras-YAP signaling, and developed a method to culture the alveolar RMS subtype as spheres. In conclusion, the YAP oncoprotein drives Ras-driven tumorigenesis by promoting cell growth, survival, and stemness, and through signaling interactions with the Notch pathway. This study also provides rationale for combination therapies targeting YAP and Notch for the treatment of Ras-driven RMS.