Evolution and development of the Drosophila peripheral olfactory system 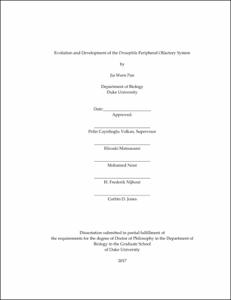 How species adapt to their local environments over the course of evolution remains an important question that underlies much of modern biology. Though much has been learned, many questions remain unanswered on the interplay between evolution and development, particularly as to the constraints and limitations that one places upon the other. This thesis is an attempt to address a few of those questions as they pertain to the olfactory system of the common laboratory fruit fly genus Drosophila.

To increase detection of a complex chemical environment, vertebrates and insects express an extraordinary number of distinct olfactory receptor neuron (ORN) classes, each functionally specialized to detect a set of odorants. This is achieved as the olfactory system develops and each of these ORN classes makes developmental decisions defining the olfactory receptor genes they will express and their class-specific connections in the brain. In addition to this high level of ORN diversity, olfactory systems are also very dynamic evolutionarily, with both the number and functionality of olfactory receptor genes as well as the requirement for certain ORN circuits being under ecological constraints. In the first chapter, I discuss molecular and developmental strategies underlying both ORN diversity and evolutionary plasticity as well as present the insect olfactory system as a model for evo-devo research in light of recent findings.

I continue by examining patterns of transcriptional parallelism and variation in the developing olfactory system of Drosophila species. Organisms have evolved strikingly parallel phenotypes in response to similar selection pressures suggesting that there may be shared constraints limiting the possible evolutionary trajectories. An example of this is seen in the behavioral adaptation of specialist Drosophila species to specific host plants, which show parallel changes in their adult olfactory neuroanatomy. I investigated the genetic basis of these parallel changes by comparing gene expression during the development of the olfactory system of these two specialist Drosophila species to that of four other generalist species. Strikingly, the parallelism observed in neuroanatomy extends to developmental programs; the patterns of expression of the transcription factors specifying olfactory receptor neuron (ORN) fates show broad convergence in species that are ecological specialists. These changes seem to result in convergent expression in only a small number of olfactory receptors in the specialist species. When compared across all six Drosophila species, a subset of olfactory receptor genes is disproportionately variable relative to other olfactory receptor neuronal lineages. A similar pattern is seen with a subset of transcription factors governing ORN development, which also show convergent expression in specialist species. These patterns suggest that a non-random component of the developmental program giving rise to the Drosophila olfactory system harbors a disproportionate amount of interspecies variation. My results suggest that the developmental parallelisms in specialist species and the non-random patterns of variation across species are consistent with the hypothesis that there are a limited number of flexible compartments during development, and that differences in the flexibility of these components shapes how developmental traits evolve.

Next, I narrow my focus to examine divergent behavioral responses towards a specific odorant, carbon dioxide (CO2), in the context of the evolution and development of Drosophila species. Carbon dioxide is an important environmental cue for many insects, regulating many behaviors including some that have direct human impacts. To further improve our understanding of how the system may vary among closely related insect species, we examined both the behavioral response to CO2 as well as the transcriptional profile of the CO2 system across the Drosophila genus. We found that CO2 generally evokes repulsive behavior across most of the Drosophilids we examined, but this behavior has been lost or reduced in several species. Comparisons of transcriptional profiles from the developing and adult antennae for a number of these species suggest that these behavioral differences may be due to differences in the expression of the CO2 co-receptor Gr63a. Furthermore, these differences in Gr63a expression are correlated with changes in the expression of a few genes known to be involved in the development of the CO2 circuit, namely dac, an important developmental transcription factor, and mip120, a member of the MMB/dREAM epigenetic regulatory complex. In contrast, most of the other known structural and developmental components of the peripheral Drosophila CO2 olfactory system seem to be fairly well conserved across all examined lineages. These findings suggest that certain components of the CO2 system may be more developmentally and evolutionarily labile, and may provide potential targets for direct manipulation of the system in the future.