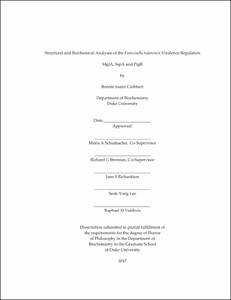 Francisella tularensis is one of the most infectious bacteria known and is the etiologic agent of tularemia. Francisella virulence arises from a 33 kilobase pathogenicity island (FPI) that is regulated by the macrophage growth locus protein A (MglA), the stringent starvation protein A (SspA) and the pathogenicity island gene regulator (PigR). MglA•SspA•PigR interacts with the RNA polymerase (RNAP) to activate FPI transcription. The activity of MglA•SspA•PigR•RNAP is mediated by ppGpp, the alarmone of the stringent response. However, the molecular mechanisms involved in FPI transcriptional regulation are not well understood.

While most bacterial SspA proteins interact with the RNAP as a homodimer, F. tularensis SspA forms a heterodimer with MglA, which is unique to F. tularensis. To gain insight into MglA function, we performed structural and biochemical studies. The MglA structure revealed that it contains a fold similar to the SspA protein family, and unexpectedly formed a homodimer in the crystal. Chemical crosslinking and size exclusion chromatography (SEC) studies showed that, while it can self-associate in solution to form a dimer, MglA preferentially forms a heterodimer with SspA. As research with MglA highlighted that MglA•SspA is likely the only functional SspA protein in Francisella, X-ray crystallography was used to determine the structure of MglA•SspA to 2.65 Å. Analysis of the MglA•SspA structure revealed a vast hydrogen bond network at the interface that is significantly larger than the network at the MglA homodimerization interface. This difference could explain why MglA and SspA form a stable heterodimer and MglA (in the absence of SspA) forms a transient homodimer.

To gain insight into the molecular mechanism by which ppGpp mediates FPI transcription, differential radial capillary action of ligand assay (DRaCALA) was performed to determine which Francisella protein binds ppGpp. The DRaCALA experiments revealed that the MglA•SspA complex binds ppGpp specifically and with high affinity, while PigR, MglA and E. coli SspA do not. To characterize this interaction the structure of MglA•SspA was determined in complex with ppGpp (MglA•SspA•ppGpp) to 2.8 Å resolution, and revealed a single ppGpp molecule, which is also coordinated by Mg2+, bound per heterodimer. Analysis of structure-guided MglA•SspA ppGpp-binding mutants by DRaCALA confirmed the crystallographic binding site of ppGpp. Intriguingly, the binding of ppGpp does not produce a marked conformational change in MglA•SspA, but as the ppGpp-binding site overlaps with the previously ascribed PigR interaction surface it seems likely that ppGpp mediates the interaction between MglA•SspA and PigR.

The interaction between PigR and MglA•SspA is largely uncharacterized. Using fluorescence anisotropy we sought to determine which portion of PigR is responsible for interactions with MglA•SspA. Using fluoresceinated PigR peptides we determined that the final 22 residues of the PigR C-terminus interact with MglA•SspA. These results were corroborated using bridge-hybrid experiments by our collaborators. Further, as FA performed with and without ppGpp shows no difference in affinity between MglA•SspA and PigR, ppGpp must mediate this interaction through an as of yet undetermined mechanism, which is supported by very different millipolarization values indicating perhaps alternative binding modes of PigR.

All together, our results contribute significantly to our understanding of FPI transcriptional regulation.