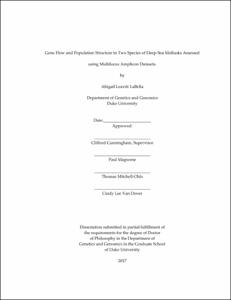 Seemingly against all odds, some of the microscopic larvae of deep-sea chemosymbiotic fauna make it through the largest ecosystem on earth to settle at a new population. Evidence of these migration events can be found in the distribution of extant populations, by capturing larvae in the water column and by examining the genetic makeup of adults. In this dissertation I use large genetic datasets to consider how migration and gene flow have influenced the population structure of two deep-sea mollusks. Specifically, I assess if observed connectivity is the result of migration mediated by stepping-stones, recent divergence and/or long distance dispersal.

In Chapters 1 and 4, I examine gene flow in vesicomyid clams which live on reducing habitats like hydrothermal vents, cold seeps and food falls around the world. Of particular interest is the clam Abyssogena southwardae. This clam has colonized habitats across the entire Atlantic Ocean basin and exhibit low genetic diversity between populations. I test the possibility that the Mid-Atlantic Ridge has served as a stepping-stone across the basin using cytochrome c oxidase subunit I mitochondrial sequences (Chapter 1) and 5 additional nuclear loci (Chapter 2). The results of this analysis suggest that the Mid-Atlantic Ridge does not serve as a stepping-stone. An alternative hypothesis for the low genetic diversity in the Abyssogena southwardae is recent colonization of these populations by a common source.

In Chapter 2 I ask a similar question about the connectivity between distant populations of the hydrothermal vent endemic limpet Lepetodrilus aff. schrolli. Despite being separated by thousands of kilometers and exhibiting strong population structure, the two populations of Lepetodrilus aff. schrolli show evidence of directional gene flow since population divergence. The lack of identifiable migrants and the modeled ocean currents in the region suggest that it is unlikely that a single larva could make the trip between the two basins. Instead, one or more of the active hydrothermal vents in the vicinity could serve as a stepping-stone between the two distant basins. I was able to detect directional migration in this non-equilibrium scenario due a large dataset consisting of 42 amplified gene regions across 93 individuals.

In Chapter 3 I explore how subsets of this large amplicon dataset can provide insight into how the number of loci sequenced affects accuracy, precision, type I error and type II error. This subset analysis shows a general increase in accuracy and precision and a general decrease in type I and type II error with the addition of more loci. Furthermore, in the particular case of Lepetodrilus aff. schrolli subsamples as large as 20 loci still gave inaccurate but precise estimates. By examining the gene trees of these amplicons I was also able to investigate how empirical gene tree discordance influences coalescent analysis.

Large amplicon datasets allowed me to detect gene flow in complicated demographic situations in Abyssogena southwardae and Lepetodrilus aff. schrolli. In the Atlantic, Abyssogena southwardae analysis of multiple loci suggest that there are not stepping-stones along the Mid-Atlantic ridge to connect the Atlantic Equatorial Belt. This analysis will benefit from the additional loci that have been collected but not analyzed. In the Pacific, Lepetodrilus aff. schrolli, stepping-stones seem like a much more likely hypothesis to accommodate the low level of migration seen between the two distant basins examined. These studies are among the largest genetic datasets collected to date in the deep-sea and should serve as a benchmark for the generation and analysis of datasets for studying connectivity in the deep-sea.