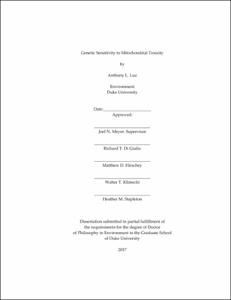 Mitochondria are the main cellular producers of ATP, and play key roles in cellular signaling and apoptosis. Mitochondria also contain their own genomes (mtDNA), which encode 13 subunits of the electron transport chain (ETC), 22 tRNAs, and 2 rRNAs, making mtDNA integrity critical to both mitochondrial and organismal health. Mitochondria are dynamic organelles that fuse and divide to maintain mitochondrial shape, number, and size. However, mitochondrial fission and fusion also play a major role in the mitochondrial stress response. For example, mildly damaged mitochondria can fuse with healthy mitochondria allowing contents to mix, resulting in the generation of healthy mitochondria, which is known as functional complementation. Alternatively, when mitochondria become damaged beyond repair, they are targeted for autophagosomal degradation, or mitophagy. The overall importance of fission, fusion, mitophagy, and mtDNA is demonstrated by the fact that deficiencies in these processes and mtDNA content cause human disease. Interestingly, the age of onset, and severity of clinical manifestations of mitochondrial disease vary from patient to patient, even in individuals harboring identical mutations. These observations suggest a role for the environment in the development and progression of certain mitochondrial diseases; however, the relationship remains poorly understood.

Lastly, I have found that reducing mtDNA content 35-55% only mildly sensitized nematodes to certain secondary toxicant exposures, including UVC and arsenite. Alternatively, reduced mtDNA content did not sensitize nematodes to acute or chronic paraquat or AfB1 exposure, and provided resistance to rotenone. However, we also found that EtBr can induce cytochrome P450s (CYPs), which play a major role in rotenone metabolism; thus, it is likely that induction of CYPs and not reduced mtDNA content is responsible for rotenone resistance. These results suggest that individuals with reduced mtDNA content may be sensitive to certain toxicant exposures, but also highlight the robust mechanism that exist to maintain the integrity of mitochondria and mtDNA.

Collectively, these results suggest individuals suffering from mitochondrial disease caused by mutations in mitochondrial fission, fusion, or mitophagy genes, or by depletion of mtDNA, may be especially sensitive to certain environmental toxicant exposures, including arsenic. Arsenic’s pervasive contamination of drinking water results in chronic exposure for over 100 million people worldwide; thus, dramatically increasing the probability of exposure for individuals suffering from mitochondrial disease, and warrants further investigation in the human populous.