Neuronal Regulation of the Innate Immune Response in Caenorhabditis elegans 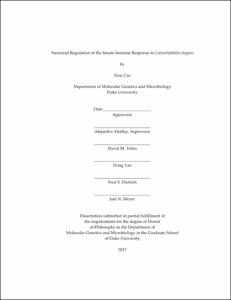 The innate immune system is the front line of host defense against microbial infections, but its rapid and uncontrolled activation elicits microbicidal mechanisms that have deleterious effects. Increasing evidence indicates that the metazoan nervous system, which responds to stimuli originating from both the internal and the external environment, functions as a modulatory apparatus that controls not only microbial killing pathways but also cellular homeostatic mechanisms. Exploiting simple organism Caenorhabditis elegans, we performed whole-animal screen and identified antibiotic colistin and dopamine antagonists as immune activators that target conserved immune pathways. The goal of this work is to investigate the role of dopamine signaling and underlying neuronal circuits in regulating the C. elegans innate immune response.

Through genetic and pharmacological studies, we identified a D1-like dopamine receptor, DOP-4, which suppresses the conserved PMK-1/p38 immune pathway in C. elegans. We also demonstrated that the manipulation of a dopaminergic neural circuit can alter the immune response upon pathogen infection. Previous studies showed that an octopamine receptor, OCTR-1, functions in chemosensory neurons to inhibit innate immunity. We found that OCTR-1-expressing neurons, ASH, and interneurons, AIA, are involved in controlling the resistance to pathogen infection. This work provides direct evidence that a neuronal network exists in C. elegans to orchestrate defenses against pathogen invasion.