The Effects of Ozone Exposure on Cardiovascular Pathophysiology 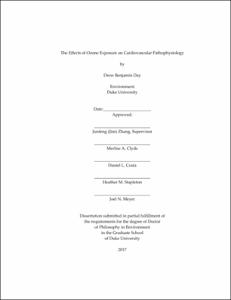 It has been commonly accepted until recently that particulate matter (PM) is responsible for the cardiovascular toxicity of air pollution mixtures, while ozone (O3) mainly adversely affects respiratory health. However, there is increasing evidence that O3, independent of PM, is also associated with cardiovascular hospitalizations and mortality, even at levels below current regulatory standards. The mechanisms underlying these epidemiological associations between O3 and cardiovascular disease remain poorly understood. The goal of this dissertation research is to use human biomarker outcomes in real-world exposure scenarios to elucidate plausible mechanisms by which O3 affects cardiovascular health.

The findings of this dissertation research are primarily based on a single longitudinal cohort study designed to assess biomarker associations with time-activity-adjusted air pollutant exposures and with indoor air purification interventions, specifically different combinations of a high efficiency particulate air (HEPA) filter and a particle-removing and O3-producing electrostatic precipitator (ESP). Eighty-nine healthy participants living on a work campus in Changsha City, China were recruited for this study conducted from December 1st, 2014 - January 31st, 2015. The unique quasi-experimental setting of participants all living and working together on a work campus allowed for better characterization of air pollutant exposure effects due to minimal variation in potential confounders. At baseline, workers had a combination of an ESP and a HEPA in the central air handling units (AHUs) of their work and living spaces. During a five-week intervention period from December 6th, 2014 to January 13th, 2015, subjects were split into two groups, both of which had the ESPs turned off and one of which also had the HEPAs removed, and after this intervention original conditions were restored. Biomarkers indicative of inflammation and oxidative stress, arterial stiffness, myocardial function, blood pressure, thrombotic factors, and spirometry were measured at four sessions, one at baseline, two at two and four weeks into the intervention period, and one two weeks after restoring baseline conditions post-intervention. Indoor and outdoor O3 and PM of less than or equal to 2.5 µm in diameter (PM2.5), along with ambient co-pollutants NO2 and SO2, were monitored throughout the study period and combined with time-activity information and filtration conditions of each residence and office. These data were used to estimate 24-hour and 2-week combined indoor and outdoor average exposure concentrations, in addition to exposures in filtered and unfiltered environments.

To test the hypothesis that air pollutant exposures observed during this study would be associated with biomarker outcomes, associations between each exposure measure and biomarker were analyzed with single- and two-pollutant linear mixed models. The 24-hour mean O3 exposure concentrations during the study ranged from 1.4 to 19.4 ppb, corresponding with daily 8-hour maximum outdoor concentrations ranging from 3.6 to 60.5 ppb, with all but six days during the study period falling below the WHO 8-hour mean O3 guideline of 50 ppb6. Within this range, in models controlling for a second co-pollutant and other potential confounders, a 10 ppb increase in 24-hour O3 was associated with mean percent increases (95% CIs) of 36.3% (29.9%, 43.0%) in the platelet activation marker soluble P-selectin (sCD62P), 2.8% (0.6%, 5.1%) in diastolic blood pressure (DBP), and 18.1% (4.5%, 33.5%) and 31.0% (0.2%, 71.1%) in the pulmonary inflammation markers fractional exhaled nitric oxide (FeNO) and exhaled breath condensate nitrite and nitrate (EBCNN), respectively, as well as a -9.5% (-17.7%, -1.4%) decrease in arterial stiffness marker augmentation index (AI) and a -15.5% (-23.8%, -6.2%) decrease in the systemic oxidative stress marker urinary malondialdehyde (UMDA). A 10 ppb increase in 2-week O3 was associated with increases of 61.1% (37.8%, 88.2%) in sCD62P and 126.2% (12.1%, 356.2%) in EBCNN. In contrast, PM2.5, NO2, and SO2 exposure measures were variably and weakly associated with markers indicating increased arterial stiffness and endothelial cell dysfunction. Only the O3 associations with sCD62P are robust in two-pollutant models and multiple testing p-value correction. These results suggest that O3 exposure enhances cardiovascular disease risk through platelet activation and blood pressure increases at levels lower than those capable of affecting lung function.

To examine if the removal of HEPA filtration and ESP in the indoor air purification systems were associated with changes in biomarker outcomes, Bayesian hierarchical generalized ridge regression (GRR) models accounting for subject-specific intercept random effects were used to assess associations between categorical intervention variables while controlling for cumulative pollutant exposures in unfiltered microenvironments, namely outdoors and places other than the offices and dorms. The GRR models allowed for more stable maximized likelihood estimates when model predictors were highly correlated. When factoring in time-activity patterns, subjects without HEPA filtration had total 24-hour PM2.5 exposures on average 37.9 µg/m3 (88.3%) higher than subjects with HEPA filtration, and the removal of the ESPs resulted in a small average reduction of 2.2 ppb (a 32.8% decrease as compared to the overall mean 24-hour O3 exposure) in each subject’s total 24-hour O3 exposure. Despite this large change in PM2.5 exposure, no biomarkers were associated with HEPA removal in any models, but ESP removal was associated with decreases of -17.1% (-23.1%, -11.3%) in sCD62P, -3.6% (-5.5%, -1.4%) in systolic blood pressure (SBP), and -3.3% (-5.9%, -0.7%) in DBP. In addition, though subjects spent an average of 64.5% of their time in filtered locations during each two-week period between sampling visits, cumulative air pollutant exposure in unfiltered environments was associated with increased sCD62P for O3, increased FeNO for PM2.5, and increased EBC MDA and decreased subendocardial viability ratio (SEVR, a marker of myocardial oxygen supply and demand) for SO2. This study suggests that ESP use may result in O3-associated adverse health effects, biomarkers traditionally associated with PM exposure may not show a response weeks into an intervention, and time spent in environments filtered by particulate air filters, though perhaps not ESPs, should be maximized to avoid the health effects of cumulative high exposures in unfiltered locations.

These O3 associations with platelet activation and blood pressure are consistent with related results in some studies but not others, and so I hypothesized that age and sex may influence each individual’s response to O3 and account for some of this variability. I tested this hypothesis by assessing pollutant exposure by age or by sex interaction term estimates in association with biomarker outcomes in the GRR models. This statistical analysis was applied not only to the main study conducted in Changsha, but also to a subsequent study conducted in Shanghai with similar exposure and biomarker measurements that had younger study participants with more balanced sex ratio. In addition, the exposure and biomarker data between these two studies were pooled for an additional analysis checking the results from the individual study findings. In the main Changsha Study, significant age by pollutant exposure interaction terms were observed for the associations between 24-hour and 2-week O3 and sCD62P, 2-week O3 and SBP, and 2-week SO2 and PWV. In addition, the association between PWV and 2-week SO2 was significantly higher in men, and the association between PWV and 24h O3 was significantly higher in women, though the latter interaction term became nonsignificant in a sensitivity analysis assessing the independent interaction effect. No interaction terms were significant in the Shanghai Study analysis. In the pooled analysis, the 24-hour O3 exposure by age interaction term was significant for both sCD62P and SBP. Also, the pooled analysis showed that women had a significantly higher association between 24-hour O3 exposure and PWV as had been seen in the Changsha Study, but as in that case this association was not robust to the sensitivity analyses. These results indicate that older individuals are more susceptible to O3-associated effects on platelet activation and blood pressure, which is supported by literature examining age-associated changes in platelets and vascular tone.

Taken together these results and the findings in previous research examining cardiovascular pathophysiologic mechanisms, a coherent, plausible mechanistic pathway emerges. In this pathway, O3-associated reaction products in the airway lead to the propagation of signals that activate platelets, which in turn enhance blood pressure and induce a procoagulant state. The findings of this dissertation contribute to the mechanistic understanding of how O3 exposure affects cardiovascular health outcomes.