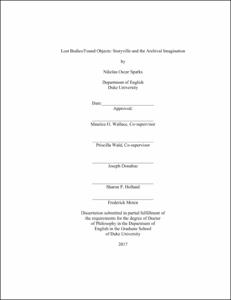 In “Lost Bodies/Found Objects: Storyville and the Archival Imagination,” I engage the numerous collections and scattered ephemera that chronicle the famed New Orleans vice district of Storyville to show the ways in which black life is overwhelmingly criminalized, homogenized, and silenced in narratives of the district. Storyville, the city’s smallest and last vice district, existed from 1897-1917 under the protection of city ordinances. The laws attempted to confine specific vices and individuals within the geographic limits of the district to protect the sanctity of the white family and maintain private property values in the city. As a result, the district strictly managed the lives of women working in the sex trade through policing and residential segregation. While all women were subject to these restrictions, black women were often barred from the relative comforts of the district’s brothels and forced to live and work out of shared shacks called “cribs.” Similarly, though to a much lesser degree, black men who worked in and frequented the district faced their own forms of segregation and racial violence. Turning to a largely obscured set of archival objects discovered through primary research—housing records, biometric technologies such as Bertillon cards, travel literature, and Blue Book guides—I read how discourses of waywardness, domesticity, race, and sexuality at the turn of the twentieth century converge to illuminate the vexed social life of Storyville. I argue that when read alongside popular histories, literary interpretations of the district, and discourses on black social life at the turn of the twentieth century, the records of the district challenge the archival narratives imposed upon them and expand historical approaches to the archives of Storyville.