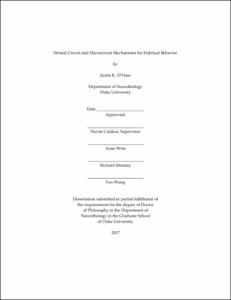 Habit formation is a behavioral adaptation that automates routine actions. This automation preserves cognitive resources that would otherwise be used to monitor action-outcome relationships. The dorsolateral striatum (DLS), which serves as the brain’s conduit into the basal ganglia, has been implicated in habit formation. However, it was not known whether and how the local DLS circuitry adapts to facilitate habitual behavior. By imaging DLS input-output computations of mice trained in a lever pressing task, I identified pathway-specific features of DLS output that strongly predicted the expression and suppression of habitual behavior. These results demonstrated that DLS actively contributes to the habit memory. To understand how these circuit-level adaptations arise, I then performed a series of ex vivo and in vivo experiments probing the local striatal microcircuitry in the context of habits. I found that a single class of interneuron, the striatal fast-spiking interneuron (FSI), was responsible for these habit-predictive changes in DLS output. I further found that FSIs undergo experience-dependent plasticity with habit formation and that their activity in DLS is required for the expression of habitual behavior. Surprisingly, FSIs also appeared to paradoxically excite physiologically distinct subsets of projection neurons in vivo. Taken together, this body of work outlines a circuit- and microcircuit-level mechanism whereby DLS provides a necessary contribution to the neurobiological underpinnings of habit.