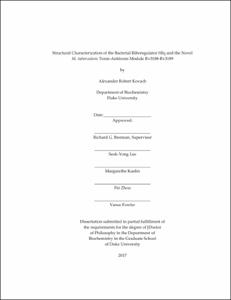 The bacterial protein Hfq is an RNA chaperone and pleiotropic posttranscriptional regulator. Hfq binds to A and U-­‐‑rich regions of small regulatory RNA (sRNA) to their cognate mRNA to facilitate their annealing, affecting stability and translation. The protein is involved in the regulation of a wide array of cellular processes, including many related to environmental stress response and virulence. The importance of Hfq in Gram-­‐‑negative bacteria is well understood, while a less clear picture remains for Gram-­‐‑positive species. We have determined the structure of Hfq from the Gram-­‐‑positive pathogen Listeria monocytogenes (Lm) in its apo form and bound to U6 RNA. U6 RNA binds to the proximal face in a canonical manner but with additional contacts made to the N3 and O4 positions of uridine by residue Q6 of Hfq. Furthermore, fluorescence polarization and tryptophan fluorescence quenching (TFQ) reveal that U16 RNA binds to Hfq with higher affinity than U6, on the basis of the longer sequence’s ability to simultaneously bind in the proximal pore and the lateral rim of the protein. TFQ also shows that surprisingly Lm Hfq can accommodate (GU)3G and U6 RNA on both proximal and distal face binding sites, suggesting Lm Hfq has a less stringent distal face A-­‐‑site than previously reported for Hfq from other species.

To understand fully how sRNA bind to the proximal face and are positioned to anneal with mRNA, we have attempted to crystallize U16 RNA with Lm Hfq and fragments of sRNA containing a hairpin with a poly-­‐‑U tail with both Lm and Escherichia coli (Ec) Hfq. While this endeavor has been largely fruitless, we have determined the structure of Ec Hfq with dsDNA. Ec Hfq-­‐‑DNA binding has been observed in multiple studies but the molecular mechanism of recognition of this nucleic by Hfq is unknown. The DNA binds to the proximal face with conserved lateral rim residues N13, R16, and R17, and residue Q41 contacting the phosphate backbone. Fluorescence polarization and TFQ reveal both dsDNA and dsRNA bind to the proximal face, indicating the observed DNA binding mode may actually be a double stranded nucleic acid binding site. We have thusly proposed a model in which the proximal face of Hfq stabilizes both single and double stranded portions of sRNA, positioning it appropriately for formation of an Hfq-­‐‑sRNA-­‐‑mRNA ternary complex.

Toxin-­‐‑antitoxin (TA) modules are ubiquitous among bacterial species with bioinformatics studies identifying at least 10000 putative TA modules. These modules have diverse functions and are implicated in many processes, including gene regulation, stress response, and persister cell formation. Whereas many bacteria may have only a handful of TA modules, the genome of Mycobacterium tuberculosis (Mtb) contains 79 TA modules, 37 of which have been confirmed to be functional in vivo. A recent transcriptome analysis of Mtb persister cells revealed 10 up-­‐‑regulated TA modules. Four of these modules do not belong to a previously characterized TA family. We have determined the structure of a C-­‐‑terminally truncated version of the toxin Rv3189 (1-­‐‑164 of 206 amino acid residues) in complex with the anti-­‐‑toxin Rv3188. Rv3189 is structurally homologous to the ADP-­‐‑ribosyltransferase core domain, suggesting a never before observed mode of action for a TA module. The toxin has been shown to inhibit growth in an E. coli model with structure guided mutagenesis identifying residues that are critical for toxin function.