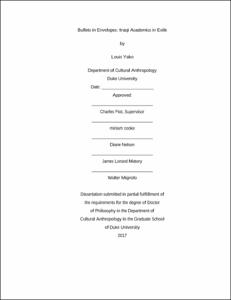 Iraqi academics have had a pivotal role in shaping and building Iraqi society, identity, and national structures, since the country’s independence from British colonial rule. Following the U.S. invasion of Iraq in 2003, a significant number of academics were assassinated and forced into exile and internal displacement. Since this population has always been intertwined with the state and different regimes of power, they are uniquely-situated to provide critical and multifaceted analyses on politics, the intertwined relationship between academics and power, and the complexity of exile. Through what I call a “genealogy of loss,” this ethnography traces the academic, political, and social lives of academics in contemporary Iraq to uncover the losses this population-and the Iraqi people- have incurred in contemporary Iraq. Beginning with the period from the ascendancy of the Ba‘ath Party in 1968, to the U.S.-led invasion in 2003 and up to the present, I examine the lives of Iraq’s exiled academics in three sites: the UK, Jordan, and Iraqi Kurdistan. I first examine their experience during the Ba‘ath era to explore their work, struggles, and hardships, as they made significant contributions to building their society and nation. I attempt to provide a nuanced anthropological account of life under the Ba‘ath regime and its ideals and complex realities. The second part examines these academics’ post-US occupation experiences both inside Iraq and in exile. I argue that the reconfiguration of the Iraqi state, and the shift from a secular, unified, one-party system into a divided space ruled by the occupying forces and their appointed sectarian and ethno-nationalist leaders and militia groups, has reconfigured the role of the academic and of higher education. The occupation and the subsequent Iraqi governments used death threats and assassinations, sectarianism, and “de-Ba‘athification” as forms of governance to restructure society. Many academics and professionals were either assassinated or forced into exile by sending them bullets and threat notes in envelopes. I explore how academics’ relatively stable jobs in pre-invasion Iraq are now “contracted lives” with devastating effects on their personal lives, intellectual projects, and the future of Iraq. Such lives entail living in spaces under precarious and temporary contracts and with residency cards subject to annual renewal or termination. These academics now live in constant fear and what I call a “plan B mode of existence.” While an extreme and violent case, this ethnography argues that the conditions of Iraqi academics in exile are connected to neoliberal global trends marked by the commercialization and corporatization of higher education, adversely affecting academic, social, and political freedoms of writing, thinking, and being in this world.