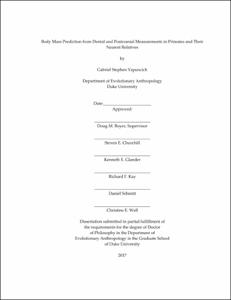 To evaluate alternative hypotheses for the role of mass and muscle-induced forces in joint construction, the allometric scaling relationships of the articular facets of the talus were estimated with phylogenetic regressions. Many articular surfaces scale with significant positive allometry, suggesting that mass-induced forces are an important influence for the bony architecture of synovial joints.

Using a large sample of primates and their nearest living relatives, body mass prediction equations were generated from the articular facet areas of the talus and calcaneus. Those facets that scaled with positive allometry were both accurate and precise. Compared to previously published prediction equations, the novel equations developed for this study were substantially more reliable.

Several methodological debates for body mass prediction were also evaluated. Prediction equations had their highest correlations when species with greater than a 20% difference between sexes are represented by both males and females. Using dental measurements from cercopithecoids housed at the National Museum of Natural History, predictive accuracy was maximized when body mass was predicted using a mean value estimated from a robust sample. Even when only a single individual was represented, tests of predictive accuracy using primates with associated body masses from several localities (Hacienda La Pacifica, Costa Rica; Gombe Stream National Park, Tanzania; Amboseli Reserve, Kenya; and the Duke Lemur Center) demonstrated that prediction equations provide more accurate predictions of species mean values than individual-specific values.