Habitat loss, alteration, and fragmentation in river networks: Implications for Freshwater Mussels and Their Landscape Genomics 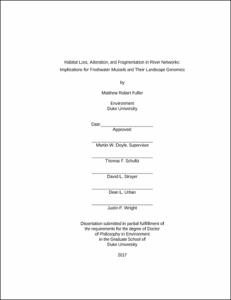 This dissertation focuses on the implications of habitat change in freshwater ecosystems. Habitat change has three primary components that are inextricably connected; habitat loss, alteration, and fragmentation. Habitat loss is the physical removal and/or replacement of “core” habitat such that a new “matrix” habitat exists in its place. Habitat alteration is the modification of core habitat that causes a quality change (either positive or negative depending on the target species). Habitat fragmentation affects the connectivity between core habitat patches in the landscape. Rivers are highly fragmented both naturally and anthropogenically, so they represent a system readily available to study the impacts of habitat change on ecosystems.

Four approaches were used to evaluate the impacts of habitat change on freshwater ecosystems. First (Chapter 1 as published in the Annals of the New York Academy of Sciences with co-authors Dr. Martin Doyle and Dr. David Strayer; see Fuller et al. (2015)), a review of the major causes and consequences of habitat change in river networks was conducted with the goal of also bridging a theoretical gap between terrestrial and freshwater systems related to habitat change ecology. Second (Chapter 2), an empirical evaluation of a fragmented (dammed) river reach was used to evaluate the local impacts of habitat loss and alteration on physical (sediment), biogeochemical (dissolved oxygen), and biological (freshwater mussels) response variables. Third (Chapter 3), gene flow model simulations were used to identify the genetic impacts of habitat fragmentation at the river-network scale. This simulation effort contrasted the impact of habitat fragmentation with species longevity to see how organisms using different life history strategies related to lifespan respond genetically to habitat fragmentation. Fourth (Chapter 4), an empirical landscape genomics evaluation of a species of freshwater mussel (Elliptio complanata) was conducted to identify its genetic response to a river network with a long history of habitat change.

Conclusions from this research make several contributions to the ecological theory of habitat change. First, by applying the habitat change lexicon in terrestrial systems to freshwater systems, sharing results and theory across the terrestrial-aquatic literature becomes simple and may advance the theory behind habitat change ecology more rapidly with more empirical results to draw upon. Second, temporally dynamic matrix habitat and species capitalizing on altered edge habitat were identified surrounding a local habitat fragmentation agent (a dam), suggesting some species may strongly benefit from the presence of edge habitat in river networks. Third, from the gene flow model simulations, the life history of a species played an important role in how organisms respond genetically to habitat fragmentation where long-lived species appear buffered from the genetic diversity loss caused by habitat fragmentation. Finally, the empirical evaluation of a freshwater mussel species that has experienced a long history of anthropogenic-driven habitat change via water quality alterations, inundation losses, and dam fragmentation appears to have maintained a population genetic structure unrelated to the expected habitat change in the system.