Dendritic cells in the intestine: sensing of microbiota and inducing of inflammatory bowel disease 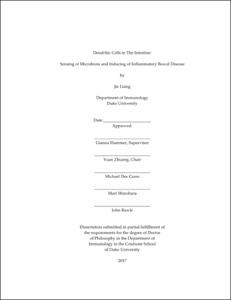 Although MyD88 pathways are potent inducer of intestinal inflammation in the colitis of IL-10 knockout mice and upon transferring of naïve T cells into Rag-deficient hosts, MyD88 pathways are not required for the inflammation of small intestine in A20cko mice. Among the MyD88-independent signaling pathways that could mediate host interaction with microbiota, Dectin-1 pathway is of particular interest because both the receptor Dectin-1 and the downstream signaling molecule CARD9 are IBD-associated genes. Additionally, the defect in either molecule influences the severity of the intestinal inflammation in mouse. We established that the production of inflammatory cytokines downstream of the Dectin-1 pathway is restricted by A20. Mechanistically, A20 inhibits TRAF6 ubiquitination downstream of the Dectin-1 pathway, thereby controlling NFκB and Jnk activation. Although we showed that CD103-CD11b+ and CD103+CD11b+ DCs express Dectin-1 and CARD9, the Dectin-1 pathway is not required for the upregulation of DC function and expansion of inflammatory T cells in the intestine of A20cko mice. Thus, our studies have unveiled a critical role of MyD88-independent pathways in mediating the interaction of the microbiota and LP-DCs. MyD88-independent pathway is capable of driving functional maturation of LP-DCs, pathological expansion of CD4 T cells, and the inflammatory disease in the small intestine.