The Role of PRCD in Building the Photoreceptor Outer Segment 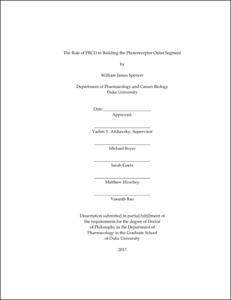 Human vision begins in the retina, where ~100 million photoreceptor neurons absorb light and respond to it, transferring the information to the brain where ultimately an image is created. Just like a camera’s sensor, an essential quality of photoreceptors for functional vision is their incredible sensitivity—our rod photoreceptors can detect the smallest unit of light possible, a single photon. To achieve this level of sensitivity, the photoreceptor evolved a primary cilium-derived light sensor organelle called the outer segment, which is a massive 30µm-long cylinder filled with a stack of ~1000 perfectly flattened disc membranes. The disc membrane houses the protein machinery necessary for generating light responses, including rhodopsin, the transmembrane photopigment protein responsible for absorbing light. By stacking 1000 discs, each with two rhodopsin containing membrane bilayers, the light absorbing membrane surface area of the retina is increased ~2000 fold, enabling the incredible sensitivity of the rod photoreceptor.

We completed a mass spectrometry project identifying the proteins which specifically reside in the photoreceptor disc. Except for one 6 kDa protein called PRCD, the proteins identified were previously known to reside in photoreceptor discs and their functions were well studied. PRCD is a recently discovered protein whose mutations are linked to retinal degeneration in canine and human patients, and had previously unknown localization in any cell type. Virtually nothing was known about this protein, so this dissertation sought to biochemically characterize the protein, understand how its mutation leads to blindness in dogs and humans, and elucidate its function in photoreceptor discs.

To biochemically characterize the protein, we generated an antibody to its C terminus, and used it to confirm its localization specific to discs by immunohistochemistry. By analyzing the multiple bands PRCD protein produces on Western blot, we discovered that the protein is post translationally modified by lipid acylation and phosphorylation. Furthermore, mutagenesis experiments determined that the lipid is attached to the single cysteine residue of PRCD, which is mutated in blind canine and human patients. This disease-causing mutation results in complete mislocalization of PRCD from the outer segment, and its degradation—effectively resulting in a null PRCD mutant allele.

Pull down experiments revealed PRCD specifically binding to rhodopsin, which was confirmed by reciprocal immunoprecipitation and co-chromatography experiments. Bolstering this result, we found that PRCD was nearly absent from rhodopsin knockout mouse retinas and without outer segment localization. This result contrasted a large cohort of other outer segment proteins; all of them except guanylate cyclase 1 were trafficked to the outer segment and expressed in relative abundance. Through reciprocal co-immunoprecipitations, we discovered that guanylate cyclase 1 is also a rhodopsin binding protein, and that this interaction is dependent on gentle detergent conditions, likely hindering its identification in the past. These results reveal that the bulk of disc specific proteins have their own, uncharacterized trafficking pathway(s), independent of rhodopsin.

To elucidate the function of PRCD in photoreceptor discs, we generated and characterized a PRCD knockout mouse, which develops a normally layered retina. The abundance and localization of disc proteins is normal in young animals, and so are their rod photoresponses. PRCD knockout mouse photoreceptors degenerate slowly, and by electron microscopy, outer segments from PRCD knockout mice are disorganized and display a phenotype similar to dogs containing C2Y mutation in PRCD. The studies presented in this dissertation are the first to lay the biochemical ground work for characterizing PRCD, and elucidate its function in photoreceptor disc membranes.