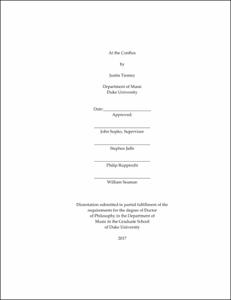 At the Conflux is a three part musically driven time-lapse film that tours Japan by road and rail. It is an exploration of its sprawling nocturnal cityscapes crisscrossed by thruways, its urban grid illuminated by fiery-hued highways pulsing through the city like arteries circulating blood, its towering skyscrapers watching over all, unmoved—soaring sentinels of steel and glass, its patterns of people rhythmically engaging with the machinery of modern life. A spacious Japanese flavored soundscape contrasts with the frenetic energy of the imagery. Piano, violin, trumpet, trombone and upright bass lines are decorated with snippets of field recordings captured in Tokyo and Osaka.

2. Craft and Expression Entwined in the Music of Martin Bresnick

The music of Martin Bresnick is filled with allusions to literature, history, politics, and music of the past. These extramusical references are often combined with complex musical structures. Symmetries and serial operations are staples of his craft. These two aspects of his work often exist in different conceptual realms. However, from the early 1990s onwards, there is a trend in Bresnick’s music in which technical elements entwine with expressive aims. This short article explores the relationship between compositional technique and referentiality through two exemplary works, the String Quartet No. 2, Bucephalus (1984) and The Bucket Rider (1995) with a brief exploration of the aesthetic of Arte Povera, an avant-garde art movement of the 1960s and 1970s Bresnick used as the title of the set of pieces to which The Bucket Rider belongs.