From Power to Profit: Natives and Non-natives in the Lower Mississippi Valley, 1763-1803 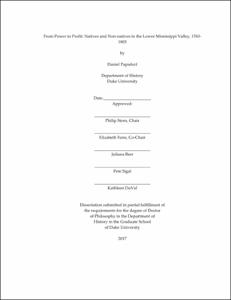 This dissertation challenges traditional approaches to European and Native American interactions. It focuses not on how Indians adapted to Euro-American peoples and markets, but conversely, how non-native economic actions were shaped by expressions of Native economic and political power within the Lower Mississippi Valley between 1763 and 1803. In their efforts to secure a place in the Lower Valley the Spanish and British sought out trade, military alliances, and land from Choctaws and Chickasaws. Likewise, Choctaws and Chickasaws sought to obtain manufactured goods from the British and Spanish. These Native nations and European empires each operated within the boundaries set by their assets and liabilities. Chickasaws and Choctaws possessed superior military capabilities, but lacked the ability to produce needed or desired manufactured goods. European empires possessed substantial economic resources, including the means to produce and transport these manufactured items, but lacked the military capacity to establish effective sovereignty over the lands that they claimed within the region.

During the second half of the eighteenth century this seeming stalemate tilted in the favor of Choctaws, Chickasaws, and in the favor of the Euro-American merchants and traders who provided these Native peoples with the goods that they desired. Seeing the need of the British and Spanish for trading partners and military allies, Choctaw and Chickasaw leaders repeatedly forced the representatives of these empires to the negotiating table, but they did so without sacrificing their sovereignty. Instead, they leveraged Euro-American dependence upon their assistance, securing numerous and valuable diplomatic payments in return for nominal alliances. This dissertation demonstrates how Euro-American merchants and traders benefitted from these interactions and exchanges between empires and Indians. Choctaws and Chickasaws only traded with allies. Diplomacy provided merchants and traders with access to Native markets, while diplomatic payments of guns, powder, and other items also subsidized the Native production of deerskins. As importantly, this diplomacy offered Euro-Americans of the Lower Valley with opportunities to sell non-native diplomats the food and manufactured goods demanded by Choctaws and Chickasaws. By revealing the centrality of imperial expenditures on diplomatic payments to Indians for the economies of the late eighteenth-century Lower Valley, this dissertation not only shapes our understanding of the deerskin trade, but also of how many British and Spanish subjects navigated economically between overlapping Native and non-native systems of power.