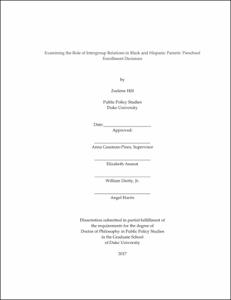 State and local governments are seeking to expand preschool programs for low-income children and to enroll an increasingly ethnically and culturally diverse population. To ensure that expanded preschools equitably serve populations who are currently under-represented in current preschool programs, policymakers must understand the contexts that influence parents’ enrollment decisions. This set of three mixed-methods studies examines the influence of inter-racial and inter-ethnic group relations on the preschool enrollment decisions of black and Hispanic parents in a region experiencing a burgeoning Hispanic population.

Paper 1: Historic and contemporary studies provide evidence that racial and ethnic relations affect parents’ selection in to and out of schools in the K-12 education context. However, no study examines whether racial and ethnic group relations that influence school enrollment in the K-12 setting may also influence parents’ selection in to or out of a public preschool program. This study addresses this gap by examining how intergroup relations are related to the public preschool enrollment status of low-income black and Hispanic parents in a region experiencing Hispanic population growth. Intergroup relations are measured through group identity, linked fate, competition and conflict. Through surveys of black and Hispanic parents in poverty (n=369), this study finds that linked fate has a negative relationship with enrollment for Hispanic parents. In addition, there is a positive relationship between parents’ report of conflict and Head Start enrollment.

Paper 3: Through in-depth interviews with 34 low-income, black and Hispanic mothers in a southern city experiencing a burgeoning Hispanic population, this study examines racial/ethnic relations as mothers engage in constrained labor and public preschool markets. This study reveals that while there is indeed a sense of competition for scarce labor market resources, these sentiments are more strongly expressed by black mothers than by Hispanic mothers. However, Hispanic and black mothers express similar levels of competition for public preschool. Interviews reveal family structure and policy determinants of intergroup tensions.