Spatial and Temporal Scaling in Ecohydrology: A Case Study of Soil Greenhouse Gas Fluxes From a Subalpine Catchment 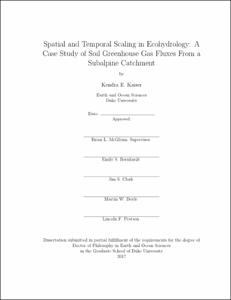 Global climate change is largely due to human induced increases in the emission of greenhouse gases to the atmosphere. Although this fact does not directly motivate this research, it does set the backdrop for the impressive increase in research that topic has garnered across disciplines over the past 30 plus years. The goals of the research presented herein were to investigate the spatial and temporal dynamics of carbon dioxide (CO2), methane (CH4), and nitrous oxide (N2O) flux dynamics in a snowmelt dominated, semi-arid watershed in central Montana and to assess if and how these fluxes were related to patterns imposed by the topographic structure of the watershed. In the process, it has become apparent that a conceptual model that incorporates all three of these important GHGs, and their relationships with environmental variables does not exist. This is certainty at least in part due to the high variability of these fluxes within and between ecosystems. However, a concise conceptual model is necessary to compare empirical evidence and test alternative scaling methods across systems. Explicitly incorporating hydrologic processes into a conceptual framework will not only be important, but imperative, to predicting and assessing responses of these biogeochemical fluxes to a changing climate. This will be particularly relevant in locations that are likely to experience a change in the timing of precipitation such as snow versus rain dominated in sub-alpine zones or change in the timing and frequency of rain events.

In this study, we assessed the spatial and temporal dynamics of three major GHGs using a spatially distributed sampling campaign over two growing seasons. Real time sensors (5 locations) and local spatial variability plots (700 m2, n = 7, with 30 samples in each) were nested within a landscape scale sampling design (n=52). The sites that were distributed across the landscape (n = 52) were organized by transects that either exemplified specific landscape elements (e.g. uplands vs riparian area) or crossed significant environmental gradients (e.g. riparian – uplands or clearcut – forest). Total annual precipitation was similar between the two focal years (2012 = 764 mm 2013 = 749 mm). However, the contribution from rain versus snow shifted from 76% snow and 24% rain in 2012 to 56% snow and 44% rain in 2013. The influential rain events in 2013 began on 17 July and were observed through 14 August.

In this study, we observed that the strength of the relationship between soil water content and topographic metrics of water redistribution increased as the average wetness of the watershed declined. Soil water content and CO2 flux (fCO2) exhibited distinct spatial and temporal variability at the plot and landscape scales in 2013. The legacy effects of clearcutting remained prevalent with regards to fCO2 (which was significantly higher in the forest than in the clearcut regrowth), while differences in the spatial and temporal variability of \theta were not evident between the two landcover types.

Relationships between fluxes of CO2, CH4, and N2O and \theta were variable. The relationship between each gas and soil water content was not consistent between riparian and upland landscape elements. Although the transition zone between riparian and upland locations has been a focal point in watershed biogeochemistry, it appears that focusing on the shifting hydrodynamics, or the dominant hydrologic processes themselves, might be more important than focusing on specific, pre-defined locations in the landscape.

We capitalized on the significant relationships between terrain mediated \theta in the uplands and cumulative seasonal flux of CH4 to empirically scale our weekly measurements of CH4 flux to the watershed scale. We determined that incorporating multiple terrain metrics in the model produced the strongest fit between modeled and observed CH4 flux. This scaling exercise showed that the best fit model predicted over twice as much CH4 consumption in the uplands than predicted with an individual topographic wetness index or by extrapolating the mean/median CH4 flux to the watershed. Additionally, we determined that even if we used the maximum value of seasonal CH4 efflux in the riparian area to estimate riparian contributions, the riparian CH4 efflux only constituted 1– 4% of the net watershed CH4 flux (depending on which value of net influx is used).

While searching for the mechanisms that create biogeochemical optima can interesting and valuable, moving forward, it seems equally important to investigate the spatiotemporal dynamics of fluxes (or times/ places) that we expect to exhibit more landscape scale characteristic levels of a given flux/pool/process. It is also critical that we do not treat the hydrologic dynamics that can influencing those pools/fluxes as a “black box”. Field studies that measure these hydrologic dynamics can provide rich data sets to test accepted and proposed conceptual models and provide useful calibration data for process-based models. The combination of these techniques will most certainly advance our understanding of the spatial and temporal dynamics of greenhouse gas fluxes across given systems. However, evolved conceptual models will be key to assessing how each unique field site or modeling exercise contributes to greater process understanding and predictive capacity. Here we contribute to an updated conceptual model of the relationship between the processes that influence these GHG fluxes and soil water content. We hope that these conceptual contributions will spur new research questions that span systems and scales, while the empirical contributions highlight a few ways that this can be done in practice.