The Politics of Indebtedness: The Dialectic of State Violence and Benevolence in Turkey 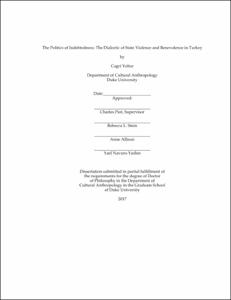 This dissertation examines the interplay between sovereignty and governmentality in the domain of welfare provision in Turkey’s Kurdish southeast through the analytic of debt.

The dissertation shows that debt lies at the heart of Turkish and Kurdish political identities in Turkey, but with a significant difference. For decades the Turkish state has exerted strong control over the economy and selectively distributed economic resources in favor of allegiant populations while dispossessing the unruly. This dynamic has given way to a common conception among the mainstream Turkish citizenry that allocation of economic resources is at the mercy of the state and citizens owe allegiance and obedience to the state for all that it bestows on them.

Although this debt morality pervades Turkey, it is interrupted and transformed in the Kurdish region. Considered the internal other of the Turkish nation and resisting ethnic homogenization and economic and political centralization policies for decades, Kurds have been subjected to systematic state violence and dispossession. This state violence and resistance to it have engendered a counter-debt morality in the Kurdish region, finding expression in the idiom bedel ödemek (paying the price). Foregrounding a history of state violence and dispossession rather than state benevolence, bedel reverses the hegemonic debt morality in Turkey, rendering the state indebted to the Kurds. Moreover, having emerged out of the Kurdish struggle, bedel redefines the Kurdish political identity around a new set of obligations: to stand up against the state for individual and collective self-determination and to pay tribute to those who made sacrifices in resisting the state.

This dissertation unpacks the political, economic and cultural logics of these two competing debt moralities and traces their contestation in the domain of welfare bureaucracy in an effort to demonstrate how struggles over sovereignty permeate governmental practices in the region.

My two years of ethnographic research (2012–2014) largely focused on the decision-making practices of local welfare officials, who enjoy an immense discretionary power in selecting beneficiaries. It showed that many officials’ practices were informed by the hegemonic debt morality in Turkey that promotes welfare as state benevolence and expects beneficiaries to repay their debt through allegiance and subservience. Although bedel leaks into welfare distribution—through the moral judgments of Kurdish officials—it works in the shadows, remaining largely silent and secret. This suppression of bedel, I suggest, bespeaks the state’s role in denying its own violence and asserting a unidirectional debt relation on beneficiary citizens. Illustrating how state-sponsored social welfare governance operates as a violent, debt-producing mechanism, the dissertation suggests that sovereign violence is intrinsic to the state’s governmental practices in the Kurdish region.

However, the domain of social welfare is not limited to the central state-sponsored social assistance programs. Over the years Kurdish movement has initiated its own welfare programs. Just as with centrally organized welfare programs, alleviation of poverty constitutes the main framework in which these initiatives operate. However, bedel plays a more overt role in these initiatives’ approach to social welfare than it does in centrally organized public social assistance programs. This difference can be traced to the categories and vocabularies that Kurdish movement-led initiatives use as well as to their practices of beneficiary selection. The dissertation traces the ways in which bedel is incorporated into the workings of Kurdish movement-led welfare programs and illustrates how this incorporation opens up room for the nurturing of resistant subjectivities and socialities that challenge the hegemonic debt morality in Turkey as well as the political and economic dispossession it entails. I thus argue that incorporation of bedel in Kurdish initiatives politicizes welfare and constitutes an obstacle to the Turkish state’s establishing and maintaining its sovereign power in the Kurdish region by means of welfare governance.

The dissertation contributes to broad theorizations of power and statecraft, redistribution and dispossession, and political conflict in the Middle East. These lines of inquiry have dominated social sciences for decades, but they have often remained separated. This disconnect obscures the close connections between governmental practices and the workings of sovereign power, preventing us from accounting for the moral and economic dynamics that inform political conflicts. I take debt as both an empirical object and an epistemological vantage point to bring these literatures together and offer different historical and ethnographic strategies of analyzing the state, political subjectivities and their conflictual construction.