Forging a History: the Inventions and Intellectual Community of the Historia Augusta 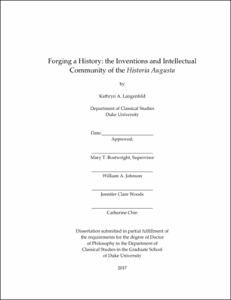 This dissertation reexamines the origins, intent, and perceived historical value of the fourth-century series of Latin imperial biographies known as the Historia Augusta. Over the course of the twentieth century, the text was interpreted as a historical “forgery” created by a “rogue scholar” who took pleasure in deceiving most, if not all, of his audience into accepting at face value the text’s false attribution to six fictitious biographers, its spurious imperial dedications, and its reliance on fabricated sources. In the last decade, studies have instead begun to suggest that many of the “fraudulent” elements of the Historia Augusta were not intended to deceive but rather entertain knowledgeable readers by interpolating elements from the ancient novel into a biographical text.

Drawing upon recent reinterpretations of the author, audience, and literary milieu of the Historia Augusta, this study reconsiders the purposes of the invented attributions, dedications, and fabricated sources within the collection. Many recent studies have concluded that the inventions of the Historia Augusta can only obscure or detract from any historical purpose and that the primary intended function of the Historia Augusta was entertainment. In contrast, through reassessment of the work’s composition and the forms and frequency of the inventions across the collection, this study demonstrates that the author uses his inventions to forge thematic and structural links across the thirty biographies and to encourage deeper reflection on his biographical subjects, the limitations of authentic history, and his contemporary political context.

Chapter One reviews recent scholarship that suggests the Historia Augusta’s readers would have been primed by their familiarity with the ancient novel and other fictive works to recognize the collection’s inventions as parodic imitations of novelistic conventions. By examining the role of social networks in the revision and circulation of texts, the chapter builds on recent findings to suggest that the need for friends in the circulation process would have impeded the ability of the Historia Augusta’s author to disseminate his work anonymously and thus suggests that the work was intended for a knowledgeable audience.

Chapter Two reexamines fundamental questions about the composition and aims of the work. Through analysis of the evidence for accretion and false-ends within the Historia Augusta, this study argues that the collection came to fruition only after several stages of revision, a position rejected by others due to the lives repetitiveness and perceived stylistic infelicities. In particular, it demonstrates that the work’s invented attributions and the imperial dedications were not an original design component of the collection at the outset of the composition, but were retroactively added at an intermediate stage of the composition when the author was making broad-scale revisions and alterations to roughly half of the lives.

Through a series of close readings and careful analysis of the text’s political and intellectual context, Chapters Three through Five suggest that the inventions were gradually devised and added to the lives as the author became increasingly engaged with contemporary texts and more self-reflective on the notion of historical evidence and research. Chapter Three demonstrates that the biographer attributions and personae evolved from puns that signaled the virtues of the emperors into central figures in the author’s self-reflective commentary on his own scholarly community. Chapter Four argues the imperial invocations were deliberately added not only to establish a comparison between the legacies of Diocletian and Constantine but also to shore up thematic elements concerning the Antonine dynasty and imperial succession that had subsequently become prominent in the composition. Chapter Five illustrates that the fabricated documents in the lives of the usurpers systematically undermine negative accounts of imperial challengers found in other contemporary sources and encourage more positive interpretations of usurpers’ merits and motivations.

By demonstrating the ways that the author uses the attributions, dedications, and fictitious documents to engage with the cultural and political transformations affecting his scholarly community, this study concludes that more credence should be given to the author’s proposition that he intended his work to serve as a historical source for historians to come (Car. 21.2-3). So too, by challenging the rigid delineations between fact and fiction, truth and fraudulence in the Historia Augusta, this project aims to create new avenues for further research not only on the Historia Augusta but also on the ways that creative impersonation and fabrication could be harnessed for historical purposes in other ancient texts.