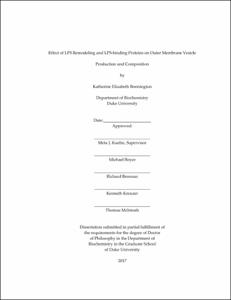 Environmental transitions cause bacteria to simultaneously alter lipopolysaccharide (LPS) structure, release LPS-binding proteins, and increase outer membrane vesicle (OMV) production. However, any relationship between these events is unknown. The research described here aims to fill this gap in knowledge by examining the effect of environmental membrane remodeling factors and LPS-binding proteins on the regulation of OMV production and composition.

The ability of Gram-negative bacteria to carefully modulate outer membrane (OM) composition is essential to their survival. However, the asymmetric and heterogeneous structure of the Gram-negative OM poses unique challenges to the cell’s successful adaption to rapid environmental transitions. Although mechanisms to recycle and degrade OM phospholipid material exist, there is no known mechanism to remove unfavorable lipopolysaccharide (LPS) glycoforms except by slow dilution through cell growth. As all Gram-negative bacteria constitutively shed outer membrane vesicles (OMVs), we propose that cells may utilize OMV formation as a way to selectively remove environmentally-disadvantageous LPS species. We examined the native kinetics of OM composition during physiologically relevant environmental changes in Salmonella enterica¸a well-characterized model system for activation of PhoP/Q and PmrA/B two component systems (TCS). In response to acidic pH, toxic metals, antimicrobial peptides, and lack of divalent cations, these TCS modify the LPS lipid A and core, lengthen the O-antigen, and up-regulate specific OM proteins. An environmental change to PhoP/Q- and PmrA/B-activating conditions simultaneously induced the addition of modified species of LPS to the OM, down-regulation of previously dominant species of LPS, greater OMV production, and increased OMV diameter. Comparison of the relative abundance of lipid A species present in the OM and the newly-budded OMVs following two sets of rapid environmental shifts revealed the retention of lipid A species with modified phosphate moieties in the OM concomitant with the selective loss of palmitoylated species via vesiculation following exposure to moderately acidic environmental conditions. A polymorphic model for regulation of OM LPS composition may explain the propensity of different LPS structures, with varied geometries and biophysical properties, to be retained in the OM or to be shed via OMVs.

Many pathogenic bacteria secrete toxins which are also lectins, and an increasing number of these proteins have been found to bind to LPS in addition to the host receptor. To investigate the effect of LPS-binding proteins on OM dynamics, we first defined the binding affinity and specificity of heat-labile enterotoxin-LPS binding. We then characterized the ability of the toxin to modulate membrane properties and stimulate OMV production in enterotoxigenic E. coli. Finally, we present a model wherein external toxin binds to LPS and crowds upon the OM to stimulate OMV formation.