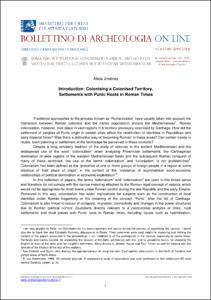 View / Download
335.7 Kb
Date
Author
Dalla Riva, M
Repository Usage Stats
134
views
71
downloads
Abstract
Traditional approaches to the process known as ‘Romanisation’ usually have taken into account the interaction between Roman colonists and native populations around the Mediterranean. Roman colonisation, however, took place in vast regions over a territory previously colonised by Carthage. How did the settlement of Punic population in certain cities affect the redefinition of identities in Republican and early Imperial times? Is there a distinctive way of ‘becoming Roman’ in these areas? Could certain trends in rituals, town planning or settlement in the landscape be observed in these contexts? How was the coexistence of different identities – Roman/Punic/local – negotiated in these populations? How was this multilayered identity expressed through material culture and to what extent might it have influenced the way these groups interacted with Roman colonists? All these issues are directly relevant to a postcolonial analysis of cities, rural settlements and ritual places with Punic roots in Roman times, where aspects like hybridisation, mimicry, coexistence of several ‘discourses’ in a given city, or expression of different types of social identity through material culture and the ‘rituals’ of the daily life, should be stressed.
Type
Book
Subject
Phoenicio-Punic Archaeology
Archaeology of colonialism
Classical Archaeology
Permalink
https://hdl.handle.net/10161/14568
Collections
More Info
Show full item record