Interaction Between the FOXO1A-209 Genotype and Tea Drinking Is Significantly Associated with Reduced Mortality at Advanced Ages. 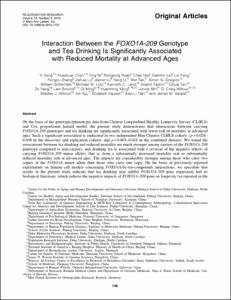 Professor in Neurology
My principal area of research involves elucidating the molecular mechanisms underlying multi-factorial diseases. My lab is primarily interested identifying the complex genetic factors that give rise to multiple sclerosis (MS) and autism. We are using targeted approaches to identify differential methylation of the oxytocin receptor gene (OXTR) in individuals with autism, and applying these data to an NICHD funded ACE award, SOARS-B, to assess long term use of oxytocin nasal spray to improve so

Professor of Biostatistics and Bioinformatics
My research interests are focused on developing and applying statistical methods to search for genes causing common human diseases. Recent work has been in the development of statistical methods for genetic studies and in identifying optimal study designs for genetic studies of complex traits. As application of these methods to specific diseases has progressed it has become apparent that etiologic and genetic heterogeneity is a major stumbling block in the research for genes for common diseases.