[More people live to be very old and with a better functioning]. 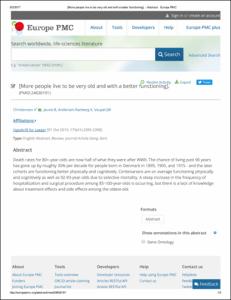 View / Download
202.9 Kb
Date
Authors
Christensen, Kaare
Jeune, Bernard
Andersen-Ranberg, Karen
Vaupel, James W
Repository Usage Stats
84
views
33
downloads
Abstract
Death rates for 80+-year-olds are now half of what they were after WWII. The chance of living past 90 years has gone up by roughly 30% per decade for people born in Denmark in 1895, 1905, and 1915 - and the later cohorts are functioning better physically and cognitively. Centenarians are on average functioning physically and cognitively as well as 92-93-year-olds due to selective mortality. A steep increase in the frequency of hospitalization and surgical procedure among 85-100-year-olds is occurring, but there is a lack of knowledge about treatment effects and side effects among the oldest-old.
Type
Journal article
Subject
Aged
Aged, 80 and over
Aging
Denmark
Female
Geriatric Assessment
Health Services for the Aged
Humans
Life Expectancy
Male
Middle Aged
Mortality
Permalink
https://hdl.handle.net/10161/14767
Collections
More Info
Show full item record