Evidence from case-control and longitudinal studies supports associations of genetic variation in APOE, CETP, and IL6 with human longevity. 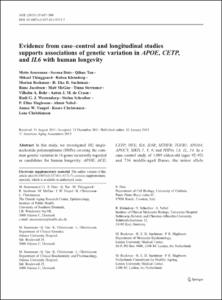 Research Professor Emeritus in the Sanford School of Public Policy
This author no longer has a Scholars@Duke profile, so the information shown here reflects their Duke status at the time this item was deposited.