Resistance to stresses and reliability of biological systems: Insights for genetic studies of human aging, health, and longevity 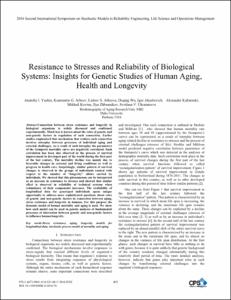 View / Download
248.0 Kb
Date
Authors
Yashin, AI
Arbeev, KG
Arbeeva, LS
Wu, D
Akushevich, I
Kulminski, A
Kovtun, M
Zhbannikov, I
Ukraintseva, SV
Show More
(9 total)
Repository Usage Stats
146
views
128
downloads
Abstract
© 2016 IEEE.Connection between stress resistance and longevity in biological organisms is widely discussed and confirmed experimentally. Much less is known about the roles of genetic and non-genetic factors in regulation of such connection. Earlier studies emphasized that mechanism that realizes such connection involves interplay between processes of individual aging and external challenges. As a result of such interplay the parameters of the Gompertz mortality curve are negatively correlated. Such correlation has been also observed in the process of survival improvement in developed part of the world during the first part of the last century. The mortality decline was mainly due to favorable changes in external and living conditions as well as progress in health care. Surprisingly, similar pattern of survival changes is observed in the groups of individuals ranked with respect to the number of «longevity» alleles carried by individuals. We showed that this phenomenon can be interpreted as an increase in resistance to stresses and showed that similar effect is observed in reliability of technical systems when redundancy of their components increases. The availability of longitudinal data for genotyped individuals opens unique opportunity to address more sophisticated questions about roles of genetic and non-genetic factors in connection between aging, stress resistance and longevity in humans. For this purpose the dynamic model of human mortality and aging is used. We show how such model can be used in genetic analyses of fundamental processes of interaction between genetic and non-genetic factors to influence human longevity.
Type
Conference
Permalink
https://hdl.handle.net/10161/14818
Published Version (Please cite this version)
10.1109/SMRLO.2016.70
Collections
More Info
Show full item record