Race Comparisons on Need for Achievement: A Meta-Analytic Alternative to Graham’s Narrative Review 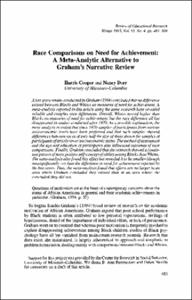 View / Download
4.9 Mb
Date
Authors
Cooper, H
Dorr, N
Repository Usage Stats
119
views
175
downloads
Abstract
A box score review conducted by Graham (1994) concluded that no difference existed between Blacks and Whites on measures of need for achievement. A meta-analysis reported in this article using the same research base revealed reliable and complex race differences. Overall, Whites scored higher than Blacks on measures of need for achievement, but the race difference all but disappeared in studies conducted after 1970. As a possible explanation, the meta-analysis revealed that since 1970 samples of participants from various socioeconomic levels have been preferred and that such samples showed differences between races of only half the size of those shown for samples of participants of strictly lower socioeconomic status. The method of assessment and the age and education of participants also influenced outcomes of race comparisons. Finally, Graham concluded that the research showed a consistent pattern of more positive self-concept of ability among Blacks than Whites. The meta-analysis also found this effect but revealed it to be smaller (though nonsignificantly so) than the difference in need for achievement rejected by the box score. Thus, the meta-analysis found that effects are no larger in an area where Graham concluded they existed than in an area where she concluded they did not. © 1995, Sage Publications. All rights reserved.
Type
Journal article
Permalink
https://hdl.handle.net/10161/14946
Published Version (Please cite this version)
10.3102/00346543065004483
Publication Info
Cooper, H; & Dorr, N (1995). Race Comparisons on Need for Achievement: A Meta-Analytic Alternative to Graham’s Narrative Review. Review of Educational Research, 65(4). pp. 483-508. 10.3102/00346543065004483. Retrieved from https://hdl.handle.net/10161/14946.
This is constructed from limited available data and may be imprecise. To cite this article, please review & use the official citation provided by the journal.
Collections
More Info
Show full item record