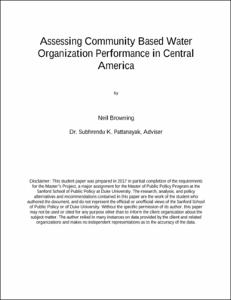 View / Download
399.7 Kb
Date
Author
Browning, Neil
Advisor
Pattanayak, Subhrendu K
Repository Usage Stats
419
views
227
downloads
Abstract
What are the effects of household, community, technical, and environmental variables on the performance and resilience of CWOs in dry regions? Since 2014, drought has severely affected Central American economic and health outcomes, necessitating international intervention. 2.5 million people were at risk of food insecurity across the region in 2014, and 65% of homes had no stock of food during the 2015 harvest season. Low-income families living in Central America’s “dry corridor” are affected the most by droughts; the UN’s long-term plan is to build climate resilience in these communities as climate change increases the magnitude and frequency of droughts. Local community-based drinking water organizations (CWOs) are key actors in Central American water provision. In rural and urban peripheral areas, CWOs provide the populace with up to 60% of its drinkable water. As climate change strains water accessibility, these local institutions will require effective management strategies so they have the capacity to handle the resource declines they will experience. I assessed how different independent variables are associated with the adaptive capacity of CWOs and identified attributes that lead to success by conducting regression analyses on a data set from three Central American countries: Costa Rica, Guatemala, and Nicaragua. I also compared the statistically significant outcomes across the three countries. The regressions are based on survey data that has been gathered at the household and CWO level, technical data that was collected by engineers, as well as environmental and census data on the subnational regions in question. First, I examined household reports of water access – defined as number of hours per day. I analyzed how this definition of water access related to household, engineering, community-level, and environmental variables. I found that volumetric pricing and elevation are the key variables to consider when designing an effective governance structure for a Central American CWO. I also determined that it is possible that national norms in CWO procedures may overstate the effect of volumetric pricing. Second, I used three different engineering variables as dependent and analyzed how they were affected by household, community-level and environmental variables. Unlike the hours of service variable, the engineering variables were collected at the community level by engineers, rather than self-reported at the household level. I conclude that elevation and volumetric pricing are the most relevant variables to consider in effective rural water provision. Elevation increases the start-up and maintenance costs of obtaining water. Volumetric pricing should be promoted as well, as it encourages the regulation of scarce water resources in the simplest way. I also conclude that higher elevation communities require more maintenance from community members, and require more expensive and powerful pumping technology.
Type
Master's project
Department
The Sanford School of Public Policy
Subject
Water
CBO
Central America
Nicaragua
Costa Rica
Guatemala
Permalink
https://hdl.handle.net/10161/14957
Citation
Browning, Neil (2017). Assessing Community Based Water Organization Performance in Central America. Master's project, Duke University. Retrieved from https://hdl.handle.net/10161/14957.
Collections
More Info
Show full item record