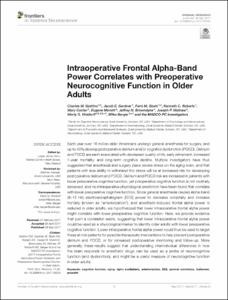 Professor of Anesthesiology
Research efforts are focused primarily in the area of functional genomics. Work has centered on investigating genetic polymorphisms in the surgical intensive care population that would predispose one to the development of the sepsis syndrome. As an extension of this work, there is ongoing investigation working to identify genetically susceptible populations at risk for developing various types of perioperative organ dysfunction. Parallel studies involve identification of a panel of biomark

Professor of Psychiatry and Behavioral Sciences
Dr. Woldorff's main research interest is in the cognitive neuroscience of attention. At each and every moment of our lives, we are bombarded by a welter of sensory information coming at us from a myriad of directions and through our various sensory modalities -- much more than we can fully process. We must continuously select and extract the most important information from this welter of sensory inputs. How the human brain accomplishes this is one of the core challenges of modern cognitive neuro
More Authors
Alphabetical list of authors with Scholars@Duke profiles.