Coupling and Decoupling to bound an approximating Markov Chain 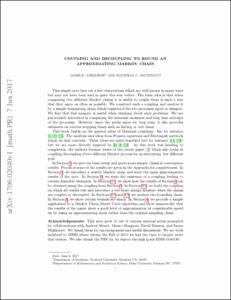 View / Download
400.9 Kb
Date
Authors
Johndrow, James E
Mattingly, Jonathan Christopher
Repository Usage Stats
291
views
79
downloads
Abstract
This simple note lays out a few observations which are well known in many ways but may not have been said in quite this way before. The basic idea is that when comparing two different Markov chains it is useful to couple them is such a way that they agree as often as possible. We construct such a coupling and analyze it by a simple dominating chain which registers if the two processes agree or disagree. We find that this imagery is useful when thinking about such problems. We are particularly interested in comparing the invariant measures and long time averages of the processes. However, since the paths agree for long runs, it also provides estimates on various stopping times such as hitting or exit times. We also show that certain bounds are tight. Finally, we provide a simple application to a Markov Chain Monte Carlo algorithm and show numerically that the results of the paper show a good level of approximation at considerable speed up by using an approximating chain rather than the original sampling chain.
Type
Journal article
Subject
math.PR
math.PR
60J
Permalink
https://hdl.handle.net/10161/15101
Collections
More Info
Show full item record James B. Duke Distinguished Professor
Jonathan Christopher  Mattingly grew up in Charlotte, NC where he attended Irwin Ave elementary and Charlotte Country Day.  He graduated from the NC School of Science and Mathematics and received a BS is Applied Mathematics with a concentration in physics from Yale University. After two years abroad with a year spent at ENS Lyon studying nonlinear and statistical physics on a Rotary Fellowship, he returned to the US to attend Princeton University where he obtained a PhD in Applied and