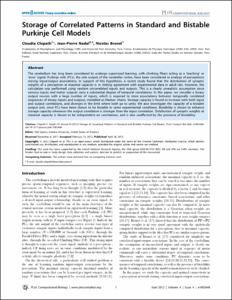 View / Download
507.3 Kb
Date
Authors
Clopath, C
Nadal, J-P
Brunel, Nicolas
Repository Usage Stats
209
views
81
downloads
Abstract
The cerebellum has long been considered to undergo supervised learning, with climbing fibers acting as a 'teaching' or 'error' signal. Purkinje cells (PCs), the sole output of the cerebellar cortex, have been considered as analogs of perceptrons storing input/output associations. In support of this hypothesis, a recent study found that the distribution of synaptic weights of a perceptron at maximal capacity is in striking agreement with experimental data in adult rats. However, the calculation was performed using random uncorrelated inputs and outputs. This is a clearly unrealistic assumption since sensory inputs and motor outputs carry a substantial degree of temporal correlations. In this paper, we consider a binary output neuron with a large number of inputs, which is required to store associations between temporally correlated sequences of binary inputs and outputs, modelled as Markov chains. Storage capacity is found to increase with both input and output correlations, and diverges in the limit where both go to unity. We also investigate the capacity of a bistable output unit, since PCs have been shown to be bistable in some experimental conditions. Bistability is shown to enhance storage capacity whenever the output correlation is stronger than the input correlation. Distribution of synaptic weights at maximal capacity is shown to be independent on correlations, and is also unaffected by the presence of bistability.
Type
Journal article
Subject
Action Potentials
Animals
Computer Simulation
Humans
Information Storage and Retrieval
Memory
Models, Neurological
Pattern Recognition, Physiological
Purkinje Cells
Statistics as Topic
Permalink
https://hdl.handle.net/10161/15126
Published Version (Please cite this version)
10.1371/journal.pcbi.1002448
Publication Info
Clopath, C; Nadal, J-P; & Brunel, Nicolas (2012). Storage of correlated patterns in standard and bistable Purkinje cell models. PLoS Comput Biol, 8(4). pp. e1002448. 10.1371/journal.pcbi.1002448. Retrieved from https://hdl.handle.net/10161/15126.
This is constructed from limited available data and may be imprecise. To cite this article, please review & use the official citation provided by the journal.
Collections
More Info
Show full item record