Physics and Treatment Planning Considerations for Multifocal Radiosurgery and SBRT 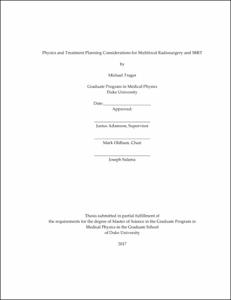 A new development in linac-based intracranial stereotactic radiosurgery (SRS) and extracranial stereotactic body radiation therapy (SBRT) is treatment of multiple targets using single isocenter volumetric modulated arc therapy (VMAT) technique, dramatically reducing treatment time while maintaining high target conformality and steep dose gradients between targets and surrounding organs at risk (OAR). In VMAT, the gantry rotates around the patient while continuously delivering radiation. Throughout the VMAT arc, the beam is modulated based on an inverse optimization algorithm in order to spare organs at risk. Single isocenter multi-target VMAT has already been implemented for intracranial SRS and is increasingly used for extracranial SBRT treatments. Despite the increasing popularity of this technique, certain inherent clinically meaningful challenges warrant further investigation. Specifically, single isocenter, multifocal SRS and SBRT can result in small volumes targets with a large off-axis distance from the treatment isocenter. Consequently, angular errors in the collimator, patient support assembly (PSA), or gantry could have an increased impact on target coverage, warranting a re-evaluation of routine linear accelerator QA tolerance recommendations in TG-142. Also, questions have arisen regarding the ability of clinical dose calculation algorithms to calculate dose accurately for these cases at large off-axis distances. Specifically, it is questionable whether or not the MLC model used is sophisticated enough to accurately model the dose off axis. This is of concern because the MLC leaves have different dimensions outside of the HD region, but the dosimetric-leaf-gap model used is the same for both regions. Applying the single isocenter technique to extracranial SBRT of oligometastases introduces additional unique challenges that must be addressed. These include greater intra and inter-fractional setup uncertainties, and dosimetric interplay since immobilization is more difficult and internal motion is non-negligible. The purpose of this thesis is to explore these specific physics and treatment planning considerations for single isocenter multi-target intracranial radiosurgery and extracranial SBRT.

For single isocenter multifocal stereotactic radiosurgery, we evaluated potential dose deviations from mechanical errors in PSA, collimator, and gantry angle within the tolerance recommended by TG-142 for radiosurgery machines. Systematic errors in PSA, collimator, and gantry angle were introduced at the recommended tolerance levels into both multifocal SRS plans and traditional single target SRS using dynamic conformal arcs, and the resulting dosimetric effect were quantified within the treatment planning system. In addition, we quantified the accuracy of the treatment planning system dose calculation algorithm for targets located at large off-axis distances with 3D Slicer analysis software. The dose distribution from the treatment planning system was compared to the distribution measured using a high-resolution 3D dosimetry system (PRESAGE®/Optical-CT). Comparisons were made using DVH and gamma analysis (criteria: 2mm/3%, 3mm/3%, and 3mm/5%). DVH comparisons included a shell analysis in which we compared the dose from 2mm within the target to the target’s surface, the surface to 2mm outside the target, and 2mm to 4mm outside the target for both the plan and the dosimeter.

For applying the single isocenter multifocal technique to extracranial oligometastases, we propose a treatment method that addresses intra and inter-fractional motion as well as dosimetric interplay. The developed technique uses a Single Isocenter with Distinct Optimizations (SIDO) in which all Volumetric Modulated Arc Therapy (VMAT) fields share an isocenter but each field treats only one target. When necessary, setup uncertainties from rotations and deformations are mitigated by applying a couch translation between VMAT arcs, and interplay is minimized using dynamic conformal arcs (DCAs) as the starting point for inverse optimization. We evaluated this planning technique using relevant dose indices including conformity index, gradient index and modulation factor.

As the distance between targets increases, the probability for requiring a second translation between treatment arcs also increases. Assuming a margin of 5mm and considering six lung and five liver patient cases, a second translational shift would be required 0%, ~10%, and ~25% of the time for target separations of 5cm, 10cm, and 15cm respectively.

Institutions utilizing a single isocenter VMAT technique for multifocal disease should pay careful attention to the angular mechanical tolerances in designing a robust and complete QA program, especially with respect to the collimator and gantry recommended tolerances. We recommend reducing collimator and gantry tolerances from 1.0° to 0.5° to decrease the potential magnitude of deviations between the planning and delivered dose distributions. The PRESAGE®/Optical-CT 3D dosimetry system verified the accuracy of the Eclipse dose calculation algorithm to within 2% for targets located up to 8cm from the isocenter. Further investigation is required for more distal targets, as they did not have sufficient agreement.

A single isocenter approach for SBRT treatment of extracranial oligometastases may be feasible using the proposed SIDO and SIDO with DCA treatment planning techniques. SIDO for extracranial oligometastases allows flexibility to mitigate spatial uncertainties from rotation and deformation, and has comparable dosimetry to traditional VMAT with low modulation when inverse optimization begins with DCAs. These advantages make SIDO beneficial for target separations of greater than 3cm, however, for target separations less than 3cm a traditional single isocenter technique is more appropriate.