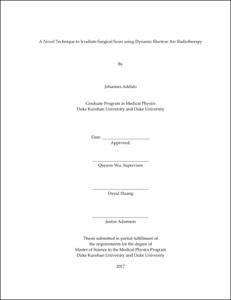 Purpose: The usage of conformal electron beam therapy techniques in treating superficial tumors on uneven surfaces has often lead to undesired outcomes such as non-uniform dose inside the target and a wide penumbra at boundary of the target. The dynamic electron arc radiotherapy (DEAR) technique has been demonstrated to improve dose distribution and minimize penumbra. The aim of this study is to investigate the feasibility and the accuracy of DEAR technique in irradiating surgical scars.

Method: 3D scar coordinates, a series of connected points along a line extracted from CT images were used. A treatment plan was designed to irradiate the scar with a uniform dose. An algorithm was developed to produce a DEAR plan consisting of control points (CP) corresponding to various positions along machine mechanical axes as a function of MU. Varian’s Spreadsheet based Automatic Generator (SAGE) software was used to verify and simulate the treatment and also to generate the plan in XML format. XML file was loaded on a TrueBeam Linac in research mode for delivery. The technique was demonstrated in i) a straight line scar on the surface of a solid water phantom and ii) curved scar on the surface of a cylindrical phantom. Energy used was 6MeV and a 6x6 cm2 applicator fitted with a 3x3 cm2 cutout. Dose at the surface and dmax were measured with Gafchromic film. Dose profiles calculated from the Eclipse eMC and Virtual Linac Monte Carlo tool were compared to film dose measurement.

Results: The dose profile analysis show that the TrueBeam Linac can deliver the designed plans for both straight line and arc scars to a high degree of accuracy. The root mean square error (RMSE) value for the line scar is approximately 0.00350 Gantry angle and it is 0.0349 for the arc scar. This is due to the fact that in the straight line delivery the gantry angle is static so it has a

Conclusion: The DEAR technique can be used to treat various line targets (scars) i.e. straight or curved lines, to a high degree of accuracy. This treatment modality can help reinvigorate electron therapy and make it a clinically viable treatment option.