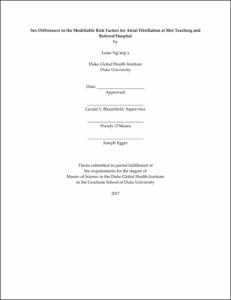 Background: Evidence mainly from high-income countries has demonstrated sex related differences in the incidence, presentation and management of patients with non-valvular AF. Such evidence is scarce in sub-Saharan Africa, yet there is a rising prevalence of AF. This study aimed to determine sex differences in the distribution and treatment pattern for modifiable risk factors in Western Kenya.

Methods: The study included two phases. Phase 1 comprised of secondary data analysis from a case control study – Study of Genetics of Atrial Fibrillation in an African population. Phase 2 included retrospective analysis of medical records at the cardiac clinic in a large referral hospital in Kenya. We determined the distribution and treatment pattern for modifiable risk factors for AF using chi-square and fisher’s exact test.

Results: Hypertension is the most prevalent modifiable risk factor for AF in western Kenya. The prevalence among men and women was 65% and 76% respectively, but this difference was not significant. Three percent of men were obese compared to 24 % of women (p =0.013). Men were more likely to drink alcohol (p = 0.001) and have a history of smoking compared to women (p = <0.001). Among men, tetra choric correlation showed a very strong association between smoking and alcohol intake (correlation coefficient > 0.9), and hypertension and obesity/overweight (correlation coefficient >0.9). These correlations were weaker among women with a correlation coefficient of 0.40 and 0.38 respectively. Among the participants, only 21% had weight and height measurements recorded. Nutritional counselling was recorded for only 3% of those who had a BMI > 29.9. Similarly, less than 10% of those with a history of smoking or alcohol intake received counselling on cessation strategies.