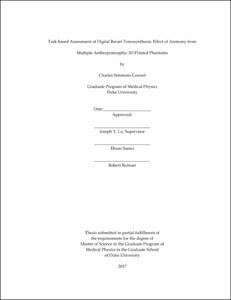 Physical phantoms are an important tool in clinical system evaluation. There exists a lack of suitable anthropomorphic physical phantoms that vary as much as a typical patient population. The lack in diversity in anthropomorphic physical phantoms makes generalizing results found using these phantoms difficult. In order to address this issue, a diverse selection of breast phantoms were 3D printed on a Stratasys Objet350 Connex printer using tissue-approximate photopolymers. These cases were then evaluated on a clinical Hologic Selenia Dimensions Digital Breast Tomosynthesis system. The evaluation consisted of a 4-alternative-forced-choice task printed on a contrast insert with silver-doped ink of concentration 200 mg/mL. The disks ranged in size from 350um-770um and a range of signal intensities was achieved by repeatedly overprinting, layering the ink. Each ink pass corresponded to an increase in signal of 1.4%. The contrast insert was imaged in 8 different orientations, at a fixed kVp of 36, and varied mAs for indicated AGD of 1.4, 2.8, and 4.2 mGy. A channelized-Hotelling observer with Gabor channels was used for evaluation and a percent correct was determined. Detection performance increased as dose increased for all cases. The most dense breast case had the worst detection performance as is had the most overlapping structures to obscure the signal. The approximately average density breast and the fatty, thinner breast performed similarly, however this may be due to the beam filtering used to avoid overexposing the detector with the high kVp and mAs used for this experiment. These results indicate that system performance is dependent on the anatomy being imaged. Further investigations with more phantom cases is needed to better evaluate the anatomical dependence of the system performance.