A Cross-Sectional Study of Pediatric HIV Disclosure in Rural Zimbabwe 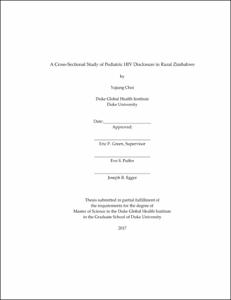 Background: An estimated 2.6 million children under 15 years are living with HIV. Children often begin antiretroviral therapy (ART) without learning why they are sick or the purpose of their medication. The objective of this study was to estimate the prevalence of pediatric HIV disclosure in two districts in rural Zimbabwe, characterize the process of disclosure, and begin investigating the predictors and consequences of disclosure.

Methods: This was a cross-sectional survey of 372 primary caregivers of HIV-positive children between the ages of 9 and 15 years living in Bikita and Zaka districts and receiving ART or pre-ART from a network of 21 eligible clinics. Surveys were administered individually in Shona by trained Zimbabwean enumerators. Disclosure was referred to if a child knows he or she has a health condition called HIV. Full disclosure was defined as a caregiver's report that the child knows he or she has an illness called HIV, how he or she acquired the illness, and can pass the infection to someone else. The prevalence of disclosure was estimated for the overall sample, by district, and by clinic. Characteristics of the process of disclosure as well as predictors and consequences of disclosure were identified for the overall sample.

Results: The overall prevalence of disclosure in the sample is 66.9 percent (95% CI 62.0 to 71.5%). Disclosure rates are similar across districts: 64.1 percent in Bikita (56.5 to 71.7%) and 69.0 percent in Zaka (62.8 to 75.2%). Across the 21 study clinics, disclosure rates ranged from 47.8 to 85.7 percent. Among the children who know that they are HIV-positive, 69.9 percent know how they were infected (63.9 to 75.2%) and 48.6 percent know that they could pass the infection to someone else (42.5 to 54.8%). The average child learned about his or her illness at age 10.0 (SD=1.9). In the majority of cases, the caregiver informed the child directly (58.6%) and 28.5 percent of children learned of their status from a health worker. Most caregivers who have disclosed to their child reported that their overall disclosure experience was positive (81.5%), with 76.7 percent having improved their adherence to medication following disclosure. Predictors of disclosure were identified as follows: caregivers’ high level of self-efficacy to disclose (p<0.05); HIV-positive caregivers’ high level of HIV-related shame (p<0.001); HIV-positive caregivers’ high level of awareness of their own HIV symptoms and implications of HIV on their health and future (p<0.05); caregivers’ assessment that their child has cognitive skills and is emotionally mature (p<0.10); higher levels of child’s formal education (p<0.05); and caregivers who are not currently married or living with someone else (p<0.01). The following were not predictors of disclosure: caregivers’ assessment of benefits of disclosure outweighing the risks of disclosure, perception of HIV-related stigma and/or discrimination, access to health care, quality of health care, child or caregiver gender, or socioeconomic status did not appear to influence the caregivers’ decision to disclose to their child.

Conclusions: Caregivers who are taking care of children between the ages of 9 and 15 need proper support and assistance from health workers for pediatric HIV disclosure. More efforts are needed to encourage and assist caregivers to inform their child about his or her HIV status. In the future, helpful disclosure support interventions would address caregivers’ HIV-related shame, improve the psychosocial wellbeing of the caregivers, educate caregivers about HIV and HIV treatment, and help them improve parent-child communication, all of which may allow caregivers to increase their overall self-efficacy and therefore facilitate a successful, age-appropriate disclosure process for both the caregivers and their children.