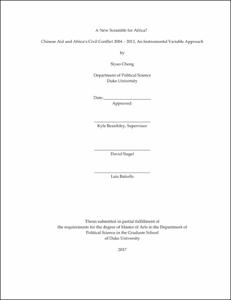 Does Chinese aid cause more civil conflicts in Africa? Doubts have been cast about Chinese development assistance finance. In this article, I argue that Chinese aid is likely to arouse more civil conflicts in Africa because Chinese aid’s non-conditionality on the recipient country tends to cause the moral hazard problem—— the recipient country may use the aid to strengthen its capacity to repress the dissents and rebels, while the unfair aid allocation could intensify the grievances in that country. Focusing on Chinese aid and African conflicts nexus from 2004 to 2013, I collect data from multiple databases and websites, and conduct a series of negative binomial regression analyses. In order to evade aid’s endogeneity problem, I employ Confucius Institutes’ development level as my instrumental variable to predict Chinese aid. I find that Chinese official aid money and Chinese official aid projects have explanatory powers for a recipient country’s civil conflicts. This study attempts to contribute to the scholarship by clarifying Chinese aid’s effects on African conflicts through an instrumental variable approach and by extending the time range for research from 2004 to 2013.