The Use of Bioaerosol Sampling for Airborne Virus Surveillance in Swine Production Facilities: A Mini Review. 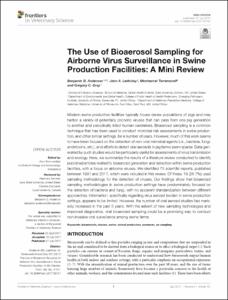 View / Download
380.9 Kb
Date
Authors
Anderson, Benjamin D
Lednicky, John A
Torremorell, Montserrat
Gray, Gregory C
Repository Usage Stats
139
views
123
downloads
Abstract
Modern swine production facilities typically house dense populations of pigs and may harbor a variety of potentially zoonotic viruses that can pass from one pig generation to another and periodically infect human caretakers. Bioaerosol sampling is a common technique that has been used to conduct microbial risk assessments in swine production, and other similar settings, for a number of years. However, much of this work seems to have been focused on the detection of non-viral microbial agents (i.e., bacteria, fungi, endotoxins, etc.), and efforts to detect viral aerosols in pig farms seem sparse. Data generated by such studies would be particularly useful for assessments of virus transmission and ecology. Here, we summarize the results of a literature review conducted to identify published articles related to bioaerosol generation and detection within swine production facilities, with a focus on airborne viruses. We identified 73 scientific reports, published between 1991 and 2017, which were included in this review. Of these, 19 (26.7%) used sampling methodology for the detection of viruses. Our findings show that bioaerosol sampling methodologies in swine production settings have predominately focused on the detection of bacteria and fungi, with no apparent standardization between different approaches. Information, specifically regarding virus aerosol burden in swine production settings, appears to be limited. However, the number of viral aerosol studies has markedly increased in the past 5 years. With the advent of new sampling technologies and improved diagnostics, viral bioaerosol sampling could be a promising way to conduct non-invasive viral surveillance among swine farms.
Type
Journal article
Subject
air sampling
animal production
bioaerosols
swine
viruses
zoonoses
Permalink
https://hdl.handle.net/10161/15434
Published Version (Please cite this version)
10.3389/fvets.2017.00121
Publication Info
Anderson, Benjamin D; Lednicky, John A; Torremorell, Montserrat; & Gray, Gregory C (2017). The Use of Bioaerosol Sampling for Airborne Virus Surveillance in Swine Production Facilities: A Mini Review. Front Vet Sci, 4. pp. 121. 10.3389/fvets.2017.00121. Retrieved from https://hdl.handle.net/10161/15434.
This is constructed from limited available data and may be imprecise. To cite this article, please review & use the official citation provided by the journal.
Collections
More Info
Show full item record Visiting Professor of Global Studies
Gregory C. Gray MD, MPH, FIDSA is an infectious disease epidemiologist and Professor at Duke University with three affiliations: The Division of Infectious Diseases in Duke University’s School of Medicine, the Duke Global Health Institute, and the Duke Nicholas School of the Environment. He also serves as a Professor in the Program in Emerging Infectious Diseases and the Global Health Institute at Duke-NUS Medical School, Singapore and as a Professor of Global Health at Duke Kunshan Uni
Alphabetical list of authors with Scholars@Duke profiles.