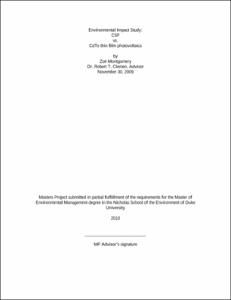 View / Download
242.6 Kb
Date
Author
Montgomery, Zoe
Advisor
Clemen, Robert T.
Repository Usage Stats
856
views
3,637
downloads
Abstract
Due to the recent market fascination with alternative energy, there has been a proliferation in solar energy technologies. Among all the new technologies, it is hard to see which will be successes and which will become obsolete as the industry matures. Even more difficult is analyzing the environmental impact of each of these technologies. The industry and recent entrants often tout the lack of resources needed to operate a solar plant, but ignore the resources required to get a product into operation. This study compares the two cheapest and most recently developed technologies in the solar energy industry: concentrated solar power parabolic trough technology and cadmium telluride photovoltaic solar panel technology. The two technologies are analyzed at a utility scale. The input materials and embodied energy are analyzed using two life cycle analysis tools: the EIOLCA tool from Carnegie Mellon and GaBi. Embodied energy is compared to the energy output of the respective technologies using two metrics: energy return on energy invested, and energy payback time. In addition to energy input and output, the two technologies are compared on land use, water use, and toxicology. The results of this study show that both technologies have advantages and disadvantages with respect to the impacts studied. Cadmium telluride photovoltaic technology is more efficient in terms of water and energy payback time, while concentrated solar trough technology is more efficient in terms of land use, toxicity, and energy returned on energy invested.
Type
Master's project
Department
Nicholas School of the Environment and Earth Sciences
Subject
solar energy
LCA
Permalink
https://hdl.handle.net/10161/1551
Citation
Montgomery, Zoe (2009). Environmental Impact Study: CSP vs. CdTe thin film photovoltaics. Master's project, Duke University. Retrieved from https://hdl.handle.net/10161/1551.
Collections
More Info
Show full item record