Estimating the Opportunity Cost of Lithium Extraction in the Salar de Uyuni, Bolivia 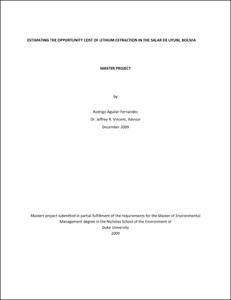 View / Download
5.7 Mb
Date
Author
Aguilar-Fernandez, Rodrigo
Advisor
Vincent, Jeffrey R.
Repository Usage Stats
2,595
views
12,278
downloads
Abstract
If the world plans to be moving away from oil based transport and towards hybrid and electric vehicles, lithium supply is the key factor. The Salar de Uyuni in Bolivia holds the largest source of lithium in the world; however, its extraction will bring a trade off with the environment. Due to the arid nature of the climate, the Salar de Uyuni basin has a sensitive ecosystem heavily dependent on water resources. Consequently, local people’s subsistence and well-being also depend on water resources on a daily basis. Studies conducted in the Salar de Uyuni basin concluded that using the same spring as a production input, water consumption for lithium extraction and crop irrigation cannot simultaneously take place. Thus, the fresh water use from the San Geronimo River creates two mutually exclusive projects, lithium mining and quinoa crop with irrigation, generating different gains to the economy of the region. The incremental cash flows model used in this study provides an estimate of the benefits that each project would provide. The results indicate that even after subtracting the opportunity cost of not conducting the quinoa irrigation project and reducing the uncertainty of the model parameters, the net present value (NPV) of the lithium extraction project is still positive and large relative to the economy of the study area. Nevertheless, the distributional and social differences have to be carefully assessed in the future according to the ecosystem services and the financial model described in this study. In order to incorporate market distortions and foreign exchange implications on the financial model, further economic research is required on both projects. Finally, water resources and its competing uses should be recognized as an economic good, so it could be managed more efficiently and used more equitably in this ecosystem.
Type
Master's project
Department
Nicholas School of the Environment and Earth Sciences
Subject
Lithium
financial model
ecosystem services
Salar de Uyuni
Bolivia
Quinoa
oportunity cost
Permalink
https://hdl.handle.net/10161/1554
Citation
Aguilar-Fernandez, Rodrigo (2009). Estimating the Opportunity Cost of Lithium Extraction in the Salar de Uyuni, Bolivia. Master's project, Duke University. Retrieved from https://hdl.handle.net/10161/1554.
Collections
More Info
Show full item record